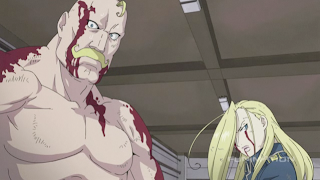 At no point in FMA1 is the killing of a homunculus attributed to the hands of ordinary humans; the only people chosen to destroy such monsters are those well trained in alchemy (and usually the ones that made the mistake of creating one themselves). FMA2, which pretty much plays the same tune, changes things with this episode, where regular human soldiers join forces to slow down Sloth (irony!) so that the Armstrong siblings and Sig can finish off the rampaging homunculus. The difference is one mentioned before, but it’s so well illustrated by this battle that I cannot fail to comment: FMA1 concentrated on individuals’ battles with their own personal demons, while FMA2 makes the case that humanity coming together to battle its collective demons is a force capable of confronting issues much larger than itself.

That being said, Izumi Curtis and Alex Louise deserve some generous applause for their battle with Sloth. FMA2 Izumi, much like her FMA1 counterpart, is allotted a brief role as combat-ready alchemist tempered with the faux humility of a housewife and pride of an alchemist. As apt a fighter as FMA1’s Izumi is via alchemy, FMA2 Izumi officially joins the ranks of the privileged saviors of Amestris, not by alchemy alone but by her use of martial arts, when she initially takes down a charging Sloth with a shoulder throw ... no alchemy involved. This supplement of her alchemy skill set (with greater explanation via the OAV, Tales of the Master) is further proof of the series’ ambitions in showing regular human action as capable of confronting foes of any nature. FMA1 Izumi is yet another tortured soul using the only gift she had to correct what she was responsible for via the misuse of said gift.

Up until this point in FMA2, Alex Louise Armstrong has been portrayed as powerful but undependable or at the least hindered by sentimentality. The battle with Sloth shows that Alex fights for the protection of his fellow citizens and family with unshakeable resolution and will not waiver from any goal set before him so long as he believes in it. FMA2 constantly belittles Armstrong’s capabilities via his older sister Olivier’s constant chiding and (let’s face it) greater military prowess. This immediately changes when the battle directly threatens those Alex loves. Much in the same vein of this battle, FMA1 uses Alex as a dependable, protective father figure for Ed and Al. He also serves a greater role as comic relief, but not in so much that viewers ever doubt his ability to take down whatever it is that stands in the way of his muscle and alchemic talent. Speaking of muscle, the Sig-Alex buff-off (mine are bigger than yours) in FMA2 does not take place in a civilian meat shop a la FMA1, but the battlefield that has become Central HQ. The resulting collaboration between Sig and Armstrong in taking down Sloth furthers the bond between human and alchemist, illustrating the show’s theme of humanity vs. non-humanity.

The following is an exchange in FMA1 episode 49:

Izumi: Don’t tell me you’ve risked your careers on the word of kids.
Maria Ross: Those children hold the state’s future. It’s our duty to enable them. At least that’s what Hughes used to say.

A fundamental philosophical difference between series stands out upon reading both selections. FMA1 lays salvation purely in the hands of the younger generation heroes, with their elders only lending support. This in and of itself lends to an emotional track, as what are children but fleshy sacks of unbridled feelings. However, FMA2 bolsters the role of adults (befittingly, given the title to this episode) as the template to which youth must subscribe to inherit prosperity. This is a well-reasoned and structured approach, which makes the most sense given the alleyways available for advancement concerning the betterment of the state or even humanity as a whole.

There are two last observations worth some mention. First, FMA2’s consistently emphasized protective nature of humans by humans is further exemplified via constant concerns over holding the Immortal Legion to the interior gates in Central. This stands in stark contrast to FMA1, where there was a similar threat to those who would be sacrificed for the Philosopher’s Stone but a decided lack of concern for all those of the State who might have to suffer under continued homunculus rule. FMA1, in other words, didn’t care much for the ordinary people, just its main characters, whereas FMA2 does an excellent job of constantly reminding viewers just why the alchemists are battling so intently. On the same front, FMA2’s rebellion is not as straightforward as FMA1’s, allowing for a countermeasure by the until-recently unseen Bradley.