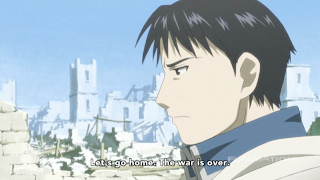 Watch Episode 54 – Beyond the Inferno

To start, FMA2 makes Hawkeye’s father’s research, Hawkeye’s back tattoo, and the supposed formula for the creation of any flame alchemist responsible for Mustang’s talents. Mustang and Hawkeye are never subjected to such interpersonal development over the course of FMA1. She’s more the supportive lover to his inherently charming and ambitious self. So the tattoo, as well as the back story explaining why Hawkeye initially supported Mustang in FMA2 (changing the state for the better), makes for a more solidly emotional statement on human reasoning and perseverance than FMA1 ever attempted to define in the same characters via understated romantic interest and alluded-to notions of political reform. In fact, FMA1 has Mustang sacrifice any aspirations of becoming leader in the name of avenging Hughes, something FMA2 Hawkeye almost shoots Mustang for considering. After all, FMA2 Mustang and his devotees have set up an elaborate ruse to fool the citizens of Amestris into thinking he’s not behind the coup in order to safely obtain the title of Fuhrer. Having all his compatriots sacrifice themselves for naught would be … well, not equivalent exchange.

The fiery battle betwixt Mustang and Envy in FMA2 that causes this reflection can very readily be likened to that of FMA1’s battle between Mustang and Pride. Both Mustangs are fighting to avenge Hughes’ death. But whereas FMA1 Mustang’s revenge means bettering the nation by ousting the homunculi (a very FMA2 theme), FMA2 Mustang’s revenge means righting his own sense of grief by killing Hughes’ killer (a very FMA1 theme). Of course, FMA2 smartly saves itself from hypocrisy by stemming the emotional killing and focusing on the larger sociopolitical goal.

Also worth noting in this fight is that FMA2 puts Mustang on higher ground morally and alchemically but not physiologically, and yet he still prevails. This directly shows the series’ intent that capabilities and purpose define righteousness, not capabilities and breeding. This may be why Hiromu Arakawa, while advising in the FMA1 production, was ok with its pre-WWII parallel universe. After all, pre-WWII Germany was a nation listening to a man, a future Fuhrer, laud the abilities of one specific race as justification for ruling the world and the expendability of all in their way. Sound familiar?

Not to harp on a singular battle, but another vast difference between the series is seen in the target of Envy’s envy. FMA1 made the homunculus’ source of jealousy his own sense of dejection by Hohenheim, who, through Envy’s eyes, showered affection upon Ed and Al, while FMA2 turns Envy’s jealousy towards the human race in general, which is a smart and logical idea ... if only a bit too cliché in its reasoning. In the same vein, something I hadn’t thought on but thought fairly amusing is that both series make Hohenheim Envy’s father. FMA1 takes the direct approach via the failed resurrection of his child with Dante, and FMA2 has Father, who is “born” from Slave 23, subsequently make the lower-rung homunculi (including Envy).

I’ll end with a point of pure conjecture: if Anime Insider were still around, I’m sure FMA2 Envy ripping out his own worm-heart would be worthy of the “death of the month” just as FMA1 Martel’s slaying-in-a-can (Al) did.