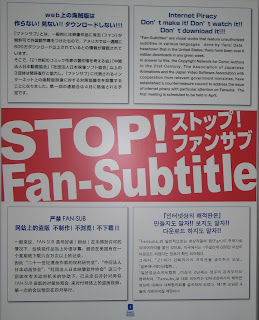 So it seems that fansubs have become a big topic of debate yet again among Internet anime fans, thanks to a recent message to fans from Eric P. Sherman, President and CEO of Bang Zoom! Entertainment. In his message, Sherman described the state of the anime industry in North America, claiming that, if fans don't stop downloading fansubs, "anime will die." A bold claim to be sure, but does it hold some truth?

In the comments thread for the post, fans lashed out against Sherman, claiming that the North American anime industry might be in danger, but anime as a whole is safe and sound. Among all of the arguments, however, I noticed that there was a prevailing idea that the industry needs to justify its existence to the fans. Well I've got a different idea. Fansubbers and fansub viewers, justify the existence of fansubs to me!

That's my question: Why do fansubs exist? Why are there legions of people ready and willing to rip anime from TV and DVDs, add their own subtitle tracks, and distribute them illegally to fans around the world without permission from the original rights holders? I ask partly out of innocent curiosity, though I certainly am a personal supporter of the North American anime industry.

Nobody denies that fansubs served a useful (if not exactly necessary) purpose in the 1980s and 1990s, when fansubbers brought over series that fans would probably never get to enjoy. They were risking illegal action in order to provide access to a medium that had little to no American industry to aid in legal distribution. So if fansubbing exists to give fans a way to watch unlicensed series, why does the practice continue to this day, and with such high participation?

Surely 480p Hulu streams or free simulcasting on Crunchyroll (together, an ever-increasing total of nearly 300 series that include over 50% of each new TV season) is enough to displace fansubs, right? If the content is out there, fans don't need to turn to illegal methods, right? Or is this about something else? Has this become an issue, not of obtaining unobtainable material, but of acquiring material at the highest possible quality for completely free? You give an inch and they take a mile, as they always say.

But really, those are just a few of my personal thoughts on the matter. I swore off nearly all but the most retro fansubs a couple of years ago, so maybe I "just don't get it" when it comes to modern fansub usage. I'd love to hear some theories from both sides of the fence on this issue. Why do we still have fansubs? Are they serving a worthy purpose to fans? What would happen to the North American anime industry (and/or the Japanese industry) if fansubbing stopped altogether?