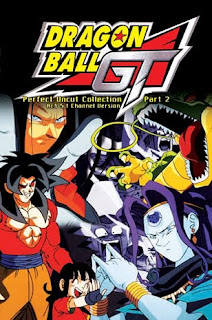 Evan: For the last entry in AniMayday, Kit provides us with his mini-review of the infamous Dragonball Z sequel series, Dragonball GT.

I once heard a joke about Dragon Ball: “How many Dragon Ball characters does it take to screw in a light bulb?” Any guesses? “One. It just takes 40 episodes!”

This is only one of the reasons that Dragon Ball GT fails horribly. First off, the storyline is full of plot holes from the beginning. Why is there another set of Dragon Balls hidden inside the Lookout? Why were they never mentioned? Why does Emperor Pilaf of all people know they're there? Shouldn't Garlic Jr. have known about them and tried to get them back in Dragon Ball Z? Ugh ... my head hurts ...

Then we have to sit through 16 episodes of filler until we get to the first main arc. Which is against what you might ask? How about a villain that can regenerate and possess others bodies and abilities? And again you might be asking, “Wasn't that the Majin Buu arc?” Well, I thought the same thing.

It's at this point that DBGT really begins to crash and burn. The Baby Arc lasts for 24 episodes, of which only five minutes per episode are dedicated to fighting. The rest either revolves around talking about a strategy that doesn't work out or useless back-story that anyone who's watched any part of this series should already know.

The other 21 episodes are divided into two arcs: the Super 17 Arc that lasts 7 episodes and is the equivalent of a Bleach Filler Arc as far as story is concerned, and the Shadow Dragon Arc. In the latter, we get a long-winded explanation about the Dragon Balls containing positive and negative energy and we find out that when you make a good wish the negative energy increases to balance out the absence of positive energy that was used to make the wish. Then the balls each turn into dragons that want to rule the Earth ...

Overall, there are way to many plot holes and not enough fighting to warrant watching DBGT. (Not to mention, this isn't even considered canon by most fans.)