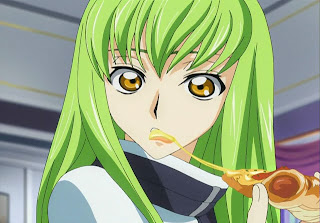 In part two of the Reverse Thieves' podcasting extravaganza, I chat with them for a lengthy hour-plus podcast about the 2006 TV anime Code Geass, from studio Sunrise. The show, a modern take on the classic 50-episode Sunrise mecha formula, follows the events of a political and military revolution, masterminded by the exiled prince Lelouch Vi Brittania. We get pretty in-depth regarding the series, so a massive SPOILER ALERT is in effect throughout the episode.

Let us know what you think of the episode, and please feel free to chime in with your own thoughts on Code Geass in an e-mail or the comments thread. Show notes and links are after the break.

[00:20] We've got the beat! And we've got the Reverse Thieves back on for more anime podcasting shenanigans.

[01:46] Let's get right into things with the summary of Code Geass, provided by Alain because Evan gets too confused when he tries to sum up all of the ridiculous events going on in this show.

[7:53] Is Lelouch a hero or a villain? Is he neither? We also begin comparing him with Light Yagami from Death Note, who is also a morally gray mastermind, despite distinct differences in their personalities.

[20:01] Discussion of Lelouch's blind, parapalegic sister Nunnally, and how she's totally the best character in this show.

[25:48] Everybody else seems to hate Suzaku, but we find him really interesting, especially in how he interacts with both Lelouch and Nunnally.

[35:14] Evan's not a huge fan of C.C. (pronounced "C-Two"), but Al and Kate are fascinated by her vague past and subtly revealed motives.

[44:33] A big argument ensues around our hosts' opinions about Princess Euphemia. Evan hates her "stupid pink hair" and the "accidental Geass" scene, while the Thieves think she's a particularly strong character.

[52:30] We discuss how much we love the ending of Code Geass, while reminding shippers and wishful thinkers of THE TRUTH about the ending. Shut up Cart-Driver-Theorists, we will hear none of your lies!

[1:03:10] Finally! Time to talk about the robot fi aw never mind, the fights suck in this show. It's not really about the robots. Also, we make fun of Kallen (a.k.a. Karen) and her badonkadonk for about five minutes.

[1:10:10] Uh-oh, now we're talking about Ashford Academy. Evan thinks it's a ridiculous waste of time, but Alain cites Shakespeare in defense of the comedy episodes.

[1:19:20] End of the show. The Reverse Thieves pimp their awesome blog and their new podcast, The Speakeasy. Follow us on Twitter (Ani-Gamers, Evan, Alain, Kate) and please leave us a review on iTunes.

[1:22:15] Enabled by the story of a futuristic robot revolution, Kate's trying to usurp Evan's host powers once again!