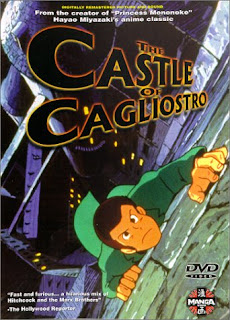 Director Hayao Miyazaki is undoubtedly an anime genius, but his films are, admittedly, quite similar to each other. As a result, as they plumb the depths of the Studio Ghibli catalog, fans of his work might find that they are facing the same themes (environmentalism, pacifism) over and over. For these fans, and indeed for any fan of animation, Miyazaki's Castle of Cagliostro is an absolute treat.

The Lupin III theatrical film was Miyazaki's first job as chief director of a motion picture, and every daring chase scene and luscious background painting makes it clear why it was not his last. The movie follows master thief Lupin III and his black-garbed buddy Jigen as they visit the European country of Cagliostro in search of the secret of counterfeit "Goat" bills. Along the way they run in with the nasty Count Cagliostro, his beautiful (and unwilling) bride-to-be Princess Clarisse, the Japanese detective Zenigata, the stoic samurai Goemon, and the sexy spy Fujiko.

The swashbuckling adventure is sure to please fans of Indiana Jones and James Bond, some of the clearest thematic brothers to the Lupin III universe. Nevertheless, the joy of Lupin III would be nothing in this movie without Miyazaki's astounding skill when it comes to adventure. The plot rolls along at a brisk pace, and though the movie clocks in at a slightly lengthy one hour and forty-nine minutes, there are no more than a handful of scenes that feel like they could have been cut. The master director's skill is most apparent in how he steadily adds new characters and challenges for Lupin to face as he attempts to sneak into Cagliostro's castle and steal away the princess. In fact, the movie reaches about three separate climaxes, each more exciting than the last, concluding with a thrilling battle between Lupin and the Count in the final moments of the film. (However, I personally found that the multi-climax structure can get a little tiring by the time the third one rolls around.)

Every moment of Castle of Cagliostro is simply delightful. The character's exaggerated personalities make them the central draw of the story, whether you're into Lupin's carefree silliness, Goemon's self-enforced aloof attitude, Zenigata's crusade against Lupin, or Jigen's constant squabbles with the same, there is something in here for everyone. In fact, the greatest tragedy of the film is that, as a movie based on a long-running manga and television show, it is forced to introduce a large cast of characters that are barely developed. Everyone except for Clarisse (nothing more than a gasping, despairing damsel in distress) is written in with just enough personality to whet your appetite, but the movie doesn't have time to significantly develop many characters besides Lupin and Zenigata. Heck, Jigen and Goemon appear early on and only actually do anything in the film's final act.

As expected of most Miyazaki films, Cagliostro features wonderful watercolor backgrounds and the director's trademark rounded character design style (negotiated, of course, with manga artist Monkey Punch's original aesthetic). But the most noticeable facet is the animation, which flows with a grace far beyond its contemporaries – after all, the original Mobile Suit Gundam was released in the same year! The movie is probably one of the best-looking anime of the 1970s, as the quality of both the art and animation could be mistaken for an early '90s TV series.

Castle of Cagliostro deserves to sit on the shelf of any anime fan, new-school or old-school. Miyazaki has since latched onto many of the themes and techniques that he used in this film (European setting, happy endings, high-flying adventure), but his seminal Lupin III movie bears a distinctly different feel from his Ghibli work. Now, over 40 years after its release, Cagliostro remains a verified anime classic, as beautiful, funny, and exciting as it must have been to audiences in 1979.


This review is based on a copy of the 2000 Manga Entertainment DVD release of the film, borrowed from the Rensselaer Sci-Fi Assn. anime library.