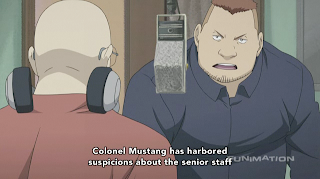 If you wanna talk irony, you must be thinking of Mr. Emotional: Roy Mustang. This is the guy who, in FMA1, was all poker face and repression. In FMA2 however, Roy’s search for vengeance is the reason for treason. Not totally unlike the stage set for WWI, the murder of a loved one has sparked (forgive the pun) a war waged out of unbridled, unrelenting agony. Aspects that make this ironic include the fact that FMA2 has been the emotionally understated series from the start, and FMA1’s Mustang almost never showed a hint of any emotion other than frustration or anger (Hughes’ funeral aside). Of course, in true FMA2 fashion, Mustang’s emotional outpouring takes the form of a coup and homunculus battle, not a teary monologue. This invokes an academic sense of emotional vengeance that serves this series well, a truly hell-driven and heartfelt burst of anguish in the form of anarchistic flames.

That being said, the same reserved anger FMA1 Mustang exuded when facing the Fuhrer is present when his FMA2 counterpart starts his fight with Envy. But once Envy reveals who Hughes’ murderer is, this fight devolves into naught but pure and vicious vengeance. Burnt out tongues! Boiling eyeball fluid! Envy’s playing with fire, and Mustang’s not in the mood for games. Here his rage erupts with all the passion of a stopped-up volcano and we get to watch Pompeii melt.

Getting back to the metaphor for Mustang’s emotional outpouring, the battle inside Central is even more brilliant when you look at who’s doing the fighting in his name. Supporting characters on the radio, ancillary citizens/soldiers giving up plot points, and main characters reaping the benefit of influence through absence all make the depiction of this coup a people’s rebellion.

Alchemist be thou for the people, indeed, but be thou for them from afar! This may seem like a silly statement, but it sums up the series’ differences quite well. FMA1 was always hands-on. Its main characters (mainly Ed and Al) helped the little people one-on-one basically in order to build their own reputations, while FMA2 more or less uses only the effects of the main characters’ actions to influence people and allow them to become important to the story in their own right. This not only continues the deviation of those with and without special abilities, but also makes statements on the responsibility those with power have to those who do not as well as the importance of the laymen.