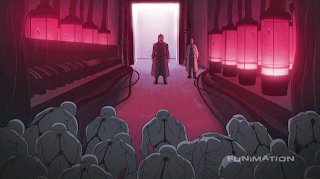 As per this episode’s namesake, a very slight yet still notable difference is the use of red liquid (Philosopher’s Stone material) to breathe life into empty vessels. In FMA1, Majhal and Shou Tucker are the only examples of alchemists who attempt this taboo. True to FMA1’s dramatic focus, Majhal uses alchemy (not Philosopher Stone-induced) to animate dolls of his long-lost love, and Shou Tucker uses Al (as the Philosopher’s Stone) to animate a doll likened to the visage of his self-sacrificed daughter, Nina. In each case, the alchemists take great pains to craft vessels that look like (at least to them) their dearly departed. These human-centric deeds show an all-consuming obsession, a heartbreaking insanity that lends to the overall emotional impact of their respective episodes as well as the overall tone of the series.

FMA2, not entirely on the other hand, portrays a secret military program that has amassed an army of cyclopean cadavers with the strict intent of animating them with red water for use as the state’s own loyal army of the undead. This works in several wonderful ways. The first of which is that it fits perfectly with homunculi plans of using humans to wipe out humans. After all, who needs human soldiers once you have an army of immortal slaves that humans built? This army also furthers the portrayal of emotional anguish of those sacrificed for the making of the red water, in the same manner as the screaming faces boiling from beneath Envy’s skin, via the torment of lost souls separated from their bodies. However, this is not so much emotionally effective as it is useful to the plot. I’ll totally admit to the creep-out factor of souls in pain crying out to their victims as they devour them, but mainly this seems to serve as another test. Will Ed kill, battle royale-style, faceless drones in constant agony that only perform acts of malice? It could be considered a mercy killing (a la Scar’s judgment on chimera Nina/Alexander) and would be the next step towards killing a homunculus.

Another notable difference is Al’s use of a Philosopher’s Stone. In FMA1, Al is Ed’s pawn, a little brother wide-eyed about the world and so scared that he does practically everything his older brother tells him to. So it isn’t surprising that Al only uses the power he inherits as an incarnation of the Philosopher’s stone to bring his brother back to life (in return for Ed’s attempted rescue of Al).

FMA2’s Al, already a much stronger and more independent character, still clings to the value of life, but also recognizes the need for independent thought and sacrifice. This is shown near the end of the episode, when Al gets a Philosopher’s Stone from one of Kimblee’s former chimeras and uses it to repair his legs (and possibly the chimera) and take on Pride and Kimblee all by himself. Seeing as a Philosopher’s Stone basically boils down to sacrificed human lives, FMA fittingly uses Al as a vessel for humanity in a fight against something non-human (Pride) as well as a human who exhibits no sense of humanity.