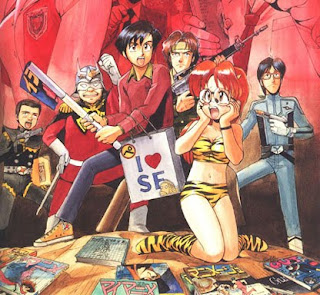 So I recently heard about this little project called the "Aniblog Tourney." It's a tournament that pits 96 anime blogs against each other, with readers voting for the winners in simple one-on-one votes. The creators kindly included Ani-Gamers in the tournament, and for the first round (April 26) we're up against Anime Full Circle. This would be the part where I write something nice about Andrew over at Anime Full Circle and wish him the best of luck in the contest, but my shōnen instincts have taken over, so instead, I'm just going to say "YOU'D BEST BE READY TO OTAKU MAN UP, ANIME FULL CIRCLE. MAY THE BEST BLOG WIN!"

But in all seriousness, I'm excited to be a part of this contest, and I hope you'll all vote for Ani-Gamers on the Aniblog Tourney site when our voting bracket starts next week on Monday, April 26.

That's about it. Head after the break for an inspirational video to get your blood pumped for the upcoming bloodbath ... I mean friendly contest!