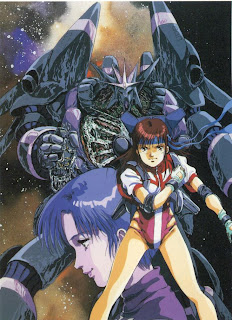 Spoiler Warning: This post contains plot spoilers for both Aim for the Top! Gunbuster and Tengen Toppa Gurren Lagann.

It's no secret that Gainax's newest fan-favorite original anime series, Tengen Toppa Gurren Lagann (2007), is heavily inspired by the studio's own Top wo Nerae, a.k.a. Aim for the Top! Gunbuster (1988), their second major project after Royal Space Force: Wings of Honneamise (1987). The two share a giant robot focus, characters whose abilities are fueled by "hard work and guts," and a certain fusion of comedy and melodrama. However, beneath these surface similarities, Gunbuster and Gurren Lagann also have one incredibly important connection, one that serves as the primary reason why both have been flagships of otaku devotion for their time: a music-like crescendo of both emotion and scale.

Personally, I am a fan of any music that builds, and what both of these anime series do is, in reality, no different from what Coldplay does in "A Message" or what Spoon does in "The Delicate Place." They take something simple, maybe even something that's not very entertaining, and expand it, bit by bit, until it turns into something fantastic.

With the seeming importance placed on the climax, it is easy for us to try to discount the rest of the work, focusing only on the "best" part of it, but this leaves out the importance of the preceding crescendo. Gunbuster is proof of this, as the first three episodes are pretty mediocre fanservice-filled vignettes showcasing the four protagonists (Noriko, Amano, Jung, and Coach Ohta) and establishing their relationships. Noriko, Amano, and Jung are both friends and rivals, the Coach is the driving force behind all of them, and Noriko has the death of a love interest (Smith Toren) to especially motivate her.

However, it is in episode 4 that the series hits its first climax, with Noriko launching for the first time in the prototype "Gunbuster" robot. The first three episodes have already established the tensions between the three girls and their coach, while the first half of episode 4 establishes Noriko's dejection over being "benched" during the battle raging outside. Suddenly, the girl transforms her grief over Smith's death and her ensuing space phobia into an intense hatred for the "space monsters" that killed the boy she loved, and jumps in Gunbuster to face off against the army of enemies.

Here director Hideaki Anno (Evangelion, Nadia) shows a firm understanding of what makes a good crescendo in music, and translates that knowledge into animation. His instruments are the characters, their interactions, the art itself, the cinematography, and of course, the background music. For the crescendo to work, these things must be present in some form throughout the earlier part of the series, but we mustn't notice them as a coherent whole. They must creep up on us, until we eventually realize that we have come to the culmination of everything the series has presented thus far.

With only six episodes to tell its grand, time-bending story, Gunbuster only achieves two (arguably three) climaxes of this sort, but with its 27-episode span, Gurren Lagann has time to pull off a number of mini-crescendos. Most notably, the one at the end of episode 8, in which Kamina pushes Simon to put his all into a battle for the first time, has all the trappings of a Gunbuster climax. Simon's slow growth as a pilot and a young man is moved along concurrently with a romantic subplot between Kamina and Yoko, and in the final moments of the scene, it all comes together as Kamina gives Simon the push he needs before tragically dying, thereby crushing both Simon's morale and Yoko's hopes for the future. 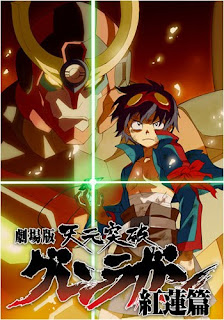 However, there is another very important type of crescendo that Gainax uses in both shows, one whose scope is far grander than that of the mini-crescendos leading into each little climax. What gives both series such an uplifting, empowering tone is a sense of constant, steady crescendo throughout the show. In both Gunbuster and Gurren Lagann, Gainax achieves this through the steady magnification of scale, moving the size of the robots and ships up until they become powerful enough to toy with such unthinkable tools as the galaxies themselves.

In Gunbuster, Anno and his team achieve this effect through an accelerated sense of time, as relativity's effects send the characters far into the future every time they warp across the universe. Every time that they return to Earth, technology has continued its inevitable march forward, and the girls find spaceships that have grown to multiple orders greater than the size of the ship they served on. In fact, humanity even progresses so far that they are capable of compressing Jupiter itself into an unthinkably massive, galaxy-smashing bomb.

In Gurren Lagann, on the other hand, Gainax uses hidden enemy technology to move the scale forward, as Team Gurren finds larger and larger weapons for it to use against the Beastmen — and later the Anti-Spirals. Granted, Gunbuster more directly speaks to the unending power of humanity to advance, reaching higher and higher heights through our ingenuity and determination, but Gurren Lagann argues — just as solidly — for the human desire to survive, and our ability to do absolutely anything to ensure that survival. (Naturally, both shows share both themes in some form.)

In the end, that is what has made both Gunbuster and Gurren Lagann so incredibly popular for their respective eras. Both bring us along for a powerful, steady crescendo, as we watch the characters — indeed humankind itself — rise further and further into the heavens. Gunbuster and Gurren Lagann are all about triumph, and their ability to pull us along for every triumph, from the large-scale battles for the universe to the most basic of emotions, is what makes them as "musically" beautiful as they are simply entertaining.