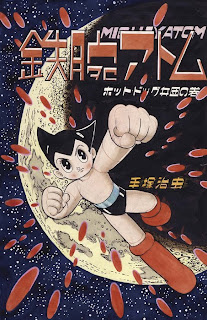 Starting today, anyone who owns an iPhone or iPod Touch (or even, presumably, an iPad, in the future) and lives in the United Kingdom, Australia, New Zealand or other listed countries can download the stonking good App “Weekly Astro Boy Magazine”. They join Japanese, Canadian and American fans who have been able to get the app since its original launch in 2009.

While this would be great news at any other time of year, this is especially timely given the ongoing Ani-Gamers Tezuka Month celebrations, and that fact that I personally have been awaiting the release of this App with baited breath since its initial announcement.

The app works by first asking you to download a small reader application — costing $1 or the local equivalent — and then each week additional “issues” are published which the user can purchase, each for an additional $1. The individual issues contain a mixture of chapters from various Tezuka works including the titular Astro Boy, Black Jack, Dororo, and Phoenix. The translations are the same as those used in the domestically published works due to the program makers agreements with Tezuka Productions and publishers — for example the Dark Horse translation is used for the Astro Boy chapters.

A free version, containing the first issue of the magazine, is available for you to download and try with no obligation. In addition, you are under no obligation at any point to purchase new issues so you don't have to worry about the app siphoning money out of you.

A nice bonus is that all the previously released chapters are available for download in English in the new territories right now — I will freely admit abusing the wi-fi at my work office downloading additional issues of the magazine this afternoon.

From a brief play with the application this afternoon I am very happy with the viewing software — the user interface is well built for viewing the manga pages, if perhaps a little awkward when you want to change the issue you wish to read and I have a bad habit of exiting the reader application entirely when trying to do this. In addition there is no real way to know which chapters you are receiving each week short of subscribing to the Application's twitter feed (included at the foot of this post) The official website only lists the titles present in a volume, not the chapter names or any additional details. I would be interested to see how it performs on a iPad once they are released, due to the larger viewing area.

A special bonus for me is that the first Astro Boy Story serialised in the magazine is “The Greatest Robot on Earth”, the origin for the Naoki Urasawa adaption "Pluto" and a story I have wanted to read for a long time but never had the opportunity.

I heartily recommend that you give the App a try should you have an iPhone or iPod touch — it does have a free version after all.