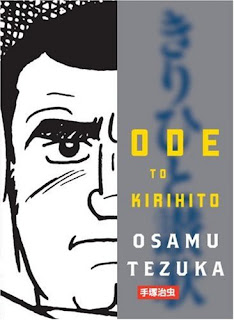 The prizes just keep rolling in this month, as we move on to our second contest of Osamu Tezuka month. This week we'll be giving away four copies of Vertical, Inc.'s new two-volume release of Ode to Kirihito. However, this week we're switching up the way to enter. Instead of just commenting on this post, you'll be entered into the contest simply by commenting on any Tezuka Month post during this week (including this one).

If possible, please include your e-mail address so we can get in contact with you to send you the prize. We'll randomly pick four winners next Sunday at 11:59pm. Watch the site next week on Monday for a post announcing the winners.

I'll start us off with a conversation topic in this post: Personally, I have found that Tezuka is particularly good at evoking strong emotions in simple yet memorable single panels. What are some of the most memorable "Tezuka moments" that you have seen in his anime and/or manga? One of my personal moments is in Ode to Kirihito, where Dr. Urabe gets a startling call about the fate of his former patient. Torn apart by this new information, he slowly turns from the phone, and on the next page, we see his face up close, a grotesque mask of anger and guilt. Though he is entirely human, Urabe looks far more beast than man in that single moment.