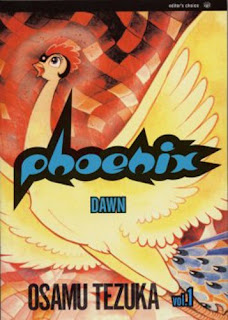 As legend has it, the phoenix is an immortal bird reborn in fire, ever watching over man and making jest of our race against death. Legend also mentions that Osama Tezuka passed away before he was able to complete the epic bearing the same name. Even with its tremendous first volume, the Kami no Manga's (Ed: “god of manga”) ambitious epic weaves a story with as much humor and pathos as classical Greek drama with the flair we expect from the master storyteller.

Volume one of Phoenix is aptly named “Dawn.” It tells the story of man’s struggle against the harsh world of the third century B.C. through the fall of a nation and the rise of hope in humanity. The title character, the phoenix herself, is seen only a handful of times, though her presence is always felt and her influence on human desire is enough to change the world. She is hunted for the belief that drinking her blood will bestow immortality and becomes a Holy Grail that inspires maddening passion. Like many of his historically set works, Tezuka takes a lot of creative license to explore rumor through his cast of stock characters. Many of the human characters are reincarnated repeatedly to emphasize the theme of longevity and the repetitious nature of humanity. Mankind’s ultimate blight of futility is its struggle and campaign to possess the phoenix for reasons both noble and selfish.

The final goal of every character, which demonstrates Tezuka’s brilliance at working from a theme, is to ensure a legacy: a reputation, a clan, or one’s place in history. The mystic queen Himiko seeks to battle off the leg-humping dog of aging. The warrior-slave Nagi seeks the power to become his own man. His captor, the mighty general Saruta, trains Nagi to become his heir and son, a minute, personal legacy compared to the bloody Manifest Destiny of the villainous conqueror Ninigi.

According to my research, the other eleven volumes of Phoenix roam between the extreme future and the ancient past, each regressing until they reach their pinnacle story during the “present” of the mid-1980’s. That is the intrinsic genius of Tezuka: to craft a story of human legacy that reaches beyond imagination, only to climactically conclude while staring you dead in the face, questioning the cost and worth of our own legacy.

From a technical direction, “Dawn” is nearly flawless. Tezuka’s framing may appear flat and cartoony to Western readers, but his panel pacing is uncanny. Three panels may take you inside a volcano, straight into a hurricane, or deeper into Saruta’s eyes as tears well inside them. There is a wonderful balance between large and small panels, between close-ups and cinematic landscapes. Larger events, such as the massacre of Nagi’s village by Saruta’s people, and then later Saruta’s national battle against Ninigi’s army, are given additional depth by the personal stake of the characters. Few manga writers truly understand the important balance of plot and character the way Tezuka did. For him they dance and flow as smoothly as his action lines.

I wouldn’t be Uncle Yo if I didn’t mention the small touches of humor that round out the story so well. Tezuka is famous for putting himself into his works as a supporting character or as an incidental gag. He appears twice in volume one, enjoying a soak in a volcanic lake, and waiting in line for a public restroom. During a training scene in which Nagi masters the bow and arrow, a pack of wolves charge him in every style known to man: from Kabuki to Disney-style. My favorite satirical moment comes in the treatment of the selfish Queen Himiko, whose orders are given in the same costume and language of Adolf Hitler, then Mussolini, then Napoleon. Even humorous parody can be used to demonstrate Phoenix’s theme of man’s repetitious behavior. A tyrant, in any time or by any name, is still a tyrant.

In the end, the firebird is as elusive and free as the wind that carries her, and her enduring presence is the greater metaphor for man’s quest for legacy. And as a fitting conclusion, the story comes full circle with a secret tribe of man (founded by one the spy and renegade character Em Dee,) sends its eldest son to climb beyond the fertile womb of their enclosed mountain valley and into the blinding light of the sun. It is a marvelous shock as mankind is given another chance at rebirth, to carry forward, to persevere against hardships. For fans of that first episode of Gurren Lagann, you’ll find a striking parallel in composition and theme, for at the story’s end the adventure only begins anew, and the ballad of the phoenix rises for another glorious reprise.

It’s Osama Tezuka. He is that good. Only better.


This review is based on a Viz Media graphic novel purchased by the reviewer.