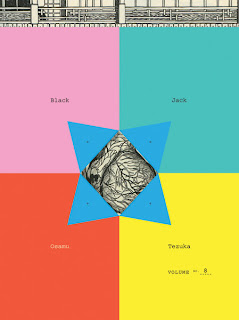 Sometimes, when I have a spare moment, I wonder what would have been if I had followed a different path in life. Maybe I could have become a concert pianist, or a doctor. The thing is, even if I had trained to be a doctor, I would certainly have turned nowhere near as awesome as Black Jack is.

Black Jack, the titular character of Osamu Tezuka's manga, is a roguish, outcast surgeon who scorns the medical establishment and instead follows his own personal code of honor as he goes around fixing people up and then charging outrageous sums of money for his services. Black Jack is, like his scarred body, a patchwork character with many interesting facets to his personality — he can be comfortably introduced as a rude, blunt dick but is set apart by his endless drive to preserve life. Thankfully his character is free from many dull tropes; he does not have a "Heart of Gold" by any stretch of the imagination, nor does he neatly fit into the mold of a typical "anti-hero".

You may remember Ani-Gamers Podcast #016, in which we discussed Black Jack and talked quite a bit about how we disliked Pinoko, the other main character in the series who for some will be an absolute turn-off. To give you a brief introduction, Pinoko is a girl "born" of a Teratoid Cystoma who believes she is Black Jack's wife. She is generally very immature, speaks a lot of garbage with a comedic lisp and is very disruptive when involved with the story. While I am still not her greatest fan by any stretch of the imagination, I have warmed to the character with her repeated appearances, as she is a genuinely interesting character.

The art leaps seamlessly from clean character art and background to hyper-detailed shots of surgery — Tezuka's own medical training no doubt shining though. I am rather squeamish to be quite honest, and thankfully any internal body shots or injuries are shown very matter-of-factly. 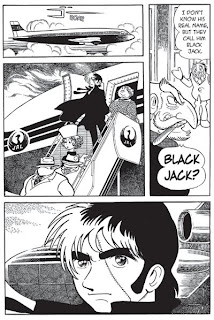 One of the wonderful things about Black Jack, at least for me, is that almost every story is completely self-contained, even those that reference older events.

This length is a major strength of the series — each self-contained chapter is only around 20-25 pages all told. Should you find yourself disliking a story for whatever reason, in a few pages you can simply move on to the next. This also allows each tale to have it's own individual impact, with brevity bringing the best out of the storytelling. The individual tales waste no time in getting to the point and setting things out — sadly this can lead to very abrupt endings, but this pace is a nice way to present the story. Most importantly, it prevents the story from getting bogged down in details, hanging plot threads, or an overarching plot. There are distinct themes throughout the manga, which are usually tied to supporting characters, but these are used sparingly and are a treat when they appear. This short format also helps out with the dialogue — no one ever minces words and everything said is important to your enjoyment of the story.

Overall the stories have a great mix of tone; the subject is grave, life-or-death indeed, but it retains a playful air. The use of lighthearted elements is especially effective at helping to maintain suspension of disbelief for the more outlandish or flat-out crazy situations. (Like the time Black Jack operated on a supercomputer! Or the time he had to excise a talking facial deformity! Or when he had to hunt down and operate on a super-intelligent stag!)

Normally in reviews you would now expect the line of "Oh, one of those is fake, but I bet you can’t guess which one!" No, all of the above happen at some point in Black Jack.

Some of my personal favorite stories are, quite simply, ones where the ending is a downer. Sometimes a case is beyond even Black Jack, or external pressures interfere, and so for whatever reason things don't turn out for the best. It’s honestly great that not every chapter ends positively — it keeps you on your toes while reading. These conclusions are often quite arresting — more than once I found myself putting the volume down to process what had just happened because it had emotionally effected me.

Meanwhile, the main thrust of the manga's varied messages deal with the sanctity and importance of preserving life above all else as well as scorning the established medical community (one of the reasons Tezuka himself never applied his medical training directly) and other confounding variables that can get in the way of saving life. 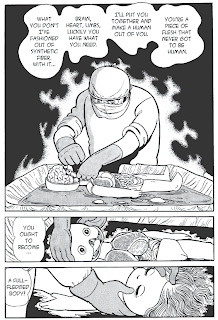 One of the facets of this overarching philosophy is in regards to euthanasia, and is one of my personal issues with the series. Without getting too political or turning this review into a soapbox, I am a personal proponent of euthanasia and assisted suicide, whereas Tezuka (via Black Jack) is dead set against the idea in any form. One of my favorite characters, Dr. Kiriko, assists those who wish to die and has his own back-story and issues to grapple with as he does his grisly duty. Sadly all the stories that involve him end up becoming one-sided lectures with those who suggest euthanasia coming off as straw men whom Black Jack successfully discredits by the end. After a while this begins to feel rather immature as the larger issue is stunted by the short format of the series.

To be frank, the first volume is probably the most uneven out of the volumes released thus far. The selection varies wildly between some great stories, most of which are vital in filling in back-story or introducing the few principal cast members, and other lesser chapters that left me skimming the page waiting for the story to end. As the series has continued, and I have become more familiar with the cast, the overall quality of the stories (and perhaps my appreciation for them) has definitely increased. The last two volumes I purchased I read voraciously over the course of a single weekend.

Despite its (admittedly few) flaws, I would not hesitate to recommend Black Jack to almost anyone. Not just those who like manga, but anyone who wants to read a succinct, clear, medically themed drama and isn't afraid of having it displayed pictorially. In order to write this review I had to recall some volumes that I had lent to various friends I was trying to introduce to the series — a task more difficult than it sounds as some did not wish to return the books.


This review is based on Vertical, Inc. graphic novels purchased by the reviewer.