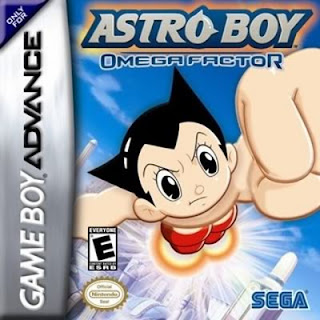 I bought this game in early 2005 and, to be utterly blunt, I would have passed it by entirely if it had not been for the prominent logo of the developer on the box. Gunstar Heroes on the Mega Drive/ Genesis is a cornerstone of my youth and as a result I have a rather shallow policy of buying any Treasure game I see.

At the time of Omega Factor’s release I was starting to get into anime in a serious way. Instead of just passively watching, I was starting to do background research — finding names of directors, checking the Internet, crawling about for more information on what to watch.

In its own way this game was a massive help as an introduction to Tezuka's work as it incorporates a great number of the Star System of characters, and even includes a barebones mini-reference guide in the options screen. Some of the characters are flat-out obscure even now, but if you know who they are it is endlessly gratifying to see them all line up and take part in the plot. Hell, one of the pivotal moments in the plot has you protecting Black Jack while he operates on someone — an honestly badass moment.

Omega Factor puts you in the role of Astro Boy (bet you didn't see that coming), and follows a complete storyline from his initial activation onwards through a series of discrete stories that are initially independent but slowly coalesce into a single, larger plot. The storyline is well-paced and simply presented, told primarily through static cutscenes with text dialogue. The storyline sucks you right in, however is deeply marred by the fact that the entire story arc requires you to play the bulk of the game's levels twice in order to complete it. However, so engrossing is the gameplay that even on my recent playthough it took a good long while to actually notice that I was replaying the majority of the levels for a second time with very little change apart from the toughness of the enemies.

Towards the end there are one or two easy-to-miss links in the storyline, particularly if you are ham-handed and accidentally skip past some key dialogue like I did. These small slip-ups required me to go scurrying to GameFAQs in order to find out how to continue. I also experienced a rather irritating glitch where a plot event would not fire properly and so I had to reset the console and re-do some earlier events in order to make the game progress.

But these small issues do not detract from the games very satisfying resolution — it is (surprisingly) emotionally powerful, especially for an action game.

The moment-to-moment gameplay comes generally under one of two main types — some stages are laid out like a side scrolling beat ‘em up and others like a shoot ‘em up. Both modes share the same controls and attacks, allowing the gameplay to shift quickly and frequently between the two without needing to explain the change each time. Neither play style is outstanding on its own but the frequent switching helps to keep the game fresh, especially as levels will often drag on a lot longer than is enjoyable, with too many waves of enemies showing up to the party. The same can be said of the game's bosses — due to a quirk of the storyline you will end up fighting all of them at least twice, each time more difficult than the last. The endgame boss rush event is difficult to the point of wanting to throw your console at the wall; I have only ever completed it once on Normal mode, no matter how often I try. Still, it was an amazing feeling when I finally managed it.

Another complaint to level against the game is that it contains a particularly aggravating quick-time event — they were a lot more novel in 2005, but even then the idea of pressing the "A" button 12 times in succession without missing once to progress the plot must have seemed bonkers.

The game shoves a remarkable amount of action onto the Game Boy screen, causing rampant slowdown in some places due to the number of enemies that are visible on the screen at one time — the fact that each time you strike an enemy a collection of stars fly out to show the damage doesn't really help this.

The different difficulty modes Omega Factor offers are very well-made, with each mode feeling like an entirely different game and providing a nice chunk of re-playability. Just don't try playing on Hard mode the first time around; otherwise you are going to sound silly when you have to explain to the doctor that a fight against your asshole robot brother on the moon is the cause of your sudden high blood pressure.

The game includes a very light RPG-style element with the application of an upgrade system over the course of the game. This is nothing outstandingly original, but the source of the upgrades is rather inventive and in keeping with the general "feeling" of Astro Boy — as you meet and understand the motivations of other characters in the story you are awarded extra points to upgrade your abilities. By the end you will have everything maxed whether you go looking for additional characters or not, so there is no need to worry about having to trawl through an FAQ to avoid being horribly gimped for the later game stages.

Shortly after I agreed to write this review, I was hit by a sudden worry. "Oh crap," I said to myself, "It's going to be a kick in the pants to the reader if I review this and it turns out you can no longer get a hold of it." A quick bit of searching shows that you can quite easily nab a copy, even so many years after its release date. Hell, you may have walked past a used copy in your own local games store before. Despite my many gripes, the core of Astro Boy: Omega Factor is solid gold. I would honestly recommend picking up a copy if you see one.


This review is based on a retail copy of the DS game purchased by the reviewer.