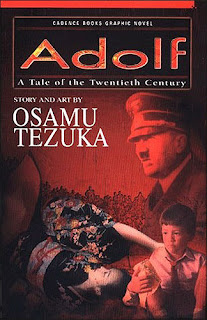 Due to Japan’s strict policies against fictionalizing the events of WWII, Osamu Tezuka had to wait nearly forty years after the war before setting a story in that era that did not rely heavily on metaphor and robots. Released in the mid-1980s, Adolf is a complex story about three young men all sharing the same name: Two of their tales span the entire war as a young German Jew and a young German Aryan who grow up as friends, then become enemies as the war develops. The third Adolf is easy enough to guess in a story about WWII.

The massive tale begins at the Olympics in Berlin, where reporter Sohei Togi searches for his missing brother only to uncover a murder conspiracy. While his journey spans across both Germany and Japan, Adolf Hitler’s influence spreads as the Hitler Youth rises like an approaching drum line. His investigations discover a pinnacle secret about Hitler upon which the decade-long story pivots. This makes him the target of many assassination attempts until he can slip away into secrecy.

Meanwhile, as one race rises to superiority, Adolf Kaufmann uses his diluted Aryan background as grounds to feel superior to previous childhood friend Adolf Kamil. In the fifth volume, their parallel return to their hometown is a dark blessing at best, especially once Kaufmann discovers his mother has remarried to Japanese reporter ... Sohei Togi!

Having spent last month reading Tezuka’s Buddha and Phoenix, the stark, serious nature of this story came as a surprise. There are very few moments of comedic relief, and almost no chibi exaggerations from Tezuka’s earlier works. Even the drawing style has very detailed character design and backgrounds that emphasize the brutal nature of the environment. It is also necessary to note that Tezuka did not use any of his cast of stock characters (Ed: the "Star System") when composing this piece: every character in Adolf is designed and used solely for Adolf. When metaphor is used, however, it is vivid and striking. The most memorable moments for me in this five-volume epic are the depictions of rape: Tezuka streaks the feminine form in heavy shadows that contort into barbaric teeth and animal fangs to deliver his point across. As with most of his works, this is a testament to humanism and the flawed raison d’etre of nationality. Tezuka is unrelenting in his portrayal of pettiness driven by race and man’s need to rise higher than his peers.

Adolf’s message and story have no place remaining in obscurity for all but the fans who find the graphic novels translated by Cadence Books (a former division of Viz Media). Tezuka’s lack of Jewish perspective is compensated by his intimate knowledge of Japan’s unsettling cultural reset at the war’s end. He is able to translate that fear and instability flawlessly in the Adolf’s western Germany community. In a poignant moment, both Adolfs and their cultural groups are huddled in darkness in a single bomb shelter. The irony and the misery are captured by Tezuka’s honed sense of lighting and composition. You feel pressed against the sweating shoulder of your enemy while, above, the town you both deserve is being blown to fiery debris by America.

Graphic novels like Adolf offer so much political and historical context, it is a shame that the current generation will lose it amid their Hetalia hug pillows.

Read Adolf. Plaster its images above your bed. Organize the youth of your communities and march in the streets until Tezuka’s banner becomes the only banner this nation reads ... uh-oh ...

(Ani-Gamers does not condone the use of Osama Tezuka’s works as propaganda or prejudice against Axis Powers Hetalia nor its creator. We would just encourage you to read more Tezuka if given the opportunity.)


This review is based on Cadence Books graphic novels purchased by the reviewer.