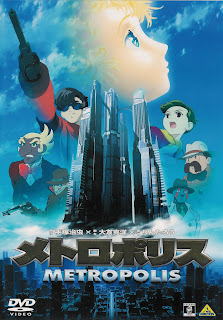 Warning: The following article discusses important plot points in the Metropolis manga and anime. Don't read it if you're avoiding being spoiled for a manga that came out over fifty years ago or an anime that came out nearly a decade ago. If you're not a wimp, however, then read on!

One of the most amazing things about reading and watching Tezuka manga and anime is the incredible depth of the world that his works maintain amongst themselves. Beyond the universes and stories created for each anime and manga, Osamu Tezuka constructed an entire backbone to his stories, a meta-story of sorts revolving around his "Star System," a so-called acting troupe filled with the familiar faces from his manga series. In a way, he has left other manga artists and animators with more than the backbone of the anime and manga industries and aesthetics; he has left behind what might be called the "Tezuka Backlot": a universe behind the stories that opens up pathways for newcomers to work with his actors and environments to create new stories from the old. Let's take a walk through director Rintaro's unique vision of this backlot, as I analyze his 2001 film, Metropolis, through the lens of Tezuka's original 1949 manga version of the story.

It is important to note that Rintaro's vision of the backlot is distinctly different from Tezuka's manga, which, legend has it, was the artist's least favorite creation. What makes the movie so interesting is that the director takes a pre-Astro Boy Tezuka manga that was admittedly not very good to begin with (due partly to cuts forced by Tezuka's editors) and infuses it with the knowledge of Tezuka's entire canon. Thus, it serves as a powerful tribute to the life and work of its original creator just as it is a technical and emotional achievement of its director. 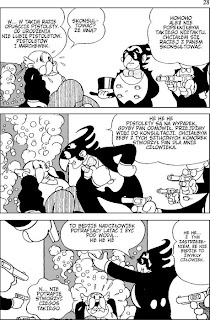 Both stories begin, delightfully, with a scientific conference held by the greatest minds in the world in the greatest city in the world, the futuristic Metropolis. Tezuka's vision holds a distinct charm with its fifties-era kitschy sci-fi look, but Rintaro makes an interesting choice: Metropolis looks (at least partially) like the futuristic world foretold in Fritz Lang's seminal 1926 science fiction film of the same name. Even though Tezuka "hadn't seen the movie and [...] didn't even know what it was about", and his idea for the manga came only from a single promotional shot of "the female robot [Maria]'s birth scene," the choice to integrate this aesthetic into the adaptation shows a fascinating reverence to not just Tezuka, but his influences as well (Tezuka 164). In fact, the "Ziggurat," a giant tower that serves as a primary visual and narrative cue in the film, is itself based on the tower in Lang's movie, and it also never actually appeared in Tezuka's manga.

It is into the bustle of this city, filled with excitement spurred by the completion of the Ziggurat's construction, that antagonist Duke Red steps into the spotlight. Seen only as the shadowy leader of the "Red Party" in the manga, Duke steps up his position in the anime, becoming not just a nobleman (as his title implies), but the most powerful man in Metropolis, with the political and economic clout to control the mayor and president, not to mention privately fund the construction of the Ziggurat and maintain a private army called the Marduks. While Duke Red was at the beginning of his career in the manga, this depiction shows him after his many roles shaped him into a far richer, more powerful figure in Tezuka's stories. But Duke Red also gained something far more meaningful through his years as a Tezuka character: a son. 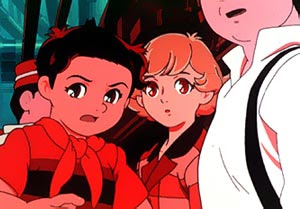 Rock Holmes, a boy hero who made his first major appearance a mere sixteen days after the publication of Metropolis in Detective Boy Rock Holmes (1949), shows up as a villain in Metropolis (EDIT: the movie version), reflecting his evolution from an innocent child to a dark, charismatic villain later in Tezuka's career. However, Rock notably does not appear in the original manga. Here Rintaro truly expresses his attention to the backlot, as he brings in a longtime actor and all of his emotional baggage to fill a spot in a story that didn't originally feature him. Rock is often depicted as the son of Duke Red (just take a look at the first chapter of Black Jack), so his dedication to his (adopted in this case) father fits in perfectly with his character. However, the Duke denies his familial love, treating him instead as nothing more than a pawn in the Marduk Party.

From the earliest moments of the story, Rock takes out his frustration with this situation out on the people around him. Most notably, he hates robots — an act of discrimination that firmly casts him as the villain in Tezuka's meta-universe — and dedicates himself to destroying any that go out of line in the city. At the very beginning of the story, he even tries to destroy the robot girl Tima (the anime's replacement of the manga's gender-changing "Michi") commissioned by Duke Red, and his final act of the film is to make a desperate stab at the robots encircling him and his father. His deep hatred of robots replaces Duke Red's nonchalant mistreatment of such in the original manga, and provides a perfect counterpoint to the embracing philosophy upheld by the anime version of the story's protagonist, Kenichi. 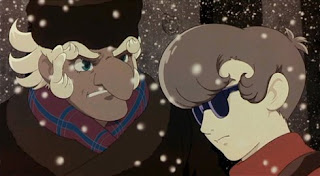 In the manga, Tezuka definitely explores the themes of culture clash that he would later expand upon in Astro Boy, but they are shown in a distinctly different light than the movie version. The clash is between Detective Shunsaku Ban, who is trying to unmask the Red Party's activities, and Duke Red. While Duke Red creates robots and drives them to work without a care for their well-being, Ban befriends one of the workers, who is quickly melted down by the Duke. Later, Tezuka transfers this robot friendship to active hostility, as Michi discovers that she is an artificial being and decides to join with the robots to tear down Metropolis, the pride and joy of the race that created and subjugated them.

Meanwhile, the Metropolis anime, for all of the subtlety that it infuses into Tezuka's original (which is quite blunt in how it states the moral about humans "destroying themselves with their own science"), squanders this in some ways by explaining exactly what moral it is trying to get across. The human rebel Atlas — yes, a human reincarnation of Astro Boy's rebellious robot brother — monologues to a stoic robot detective about the purpose of emotions in motivating humans to violence, and when Tima finally joins with the Ziggurat's systems and takes control of the hidden weapons inside, she lets everybody know that "this is punishment for toying with robots." 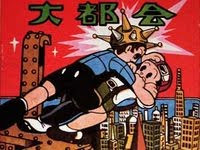 However, despite the sheer number of new cast members and set pieces that it adds, the Metropolis anime winds up being far more personal than its source material. Tezuka's manga jumps all over the place, focusing on a variety of characters and never stopping long enough to develop any of them. Kenichi and Michi are only given brief moments to show their personalities: Kenichi is a cocky yet intelligent kid and Michi is, well ... just a nice little boy I guess. In the anime, Rintaro is given a chance to show Kenichi in the grand scheme of things by contrasting him with Rock, as mentioned earlier. In doing so, he focuses less on the sprawling city of Metropolis and more on the interactions of its characters. Rock and Kenichi's brief battle on the steps in the snow is a particularly poignant struggle between two Tezuka boy heroes, forced to fight by their differing ideologies. Rock also tries to kill Tima, who is essentially "taking the place of Astro [Boy] as the robots' champion" (Palmer), though such unforgivable murders of revered characters are old hat for Rock, who already attempted to kill Osamu Tezuka himself in the Vampires manga.

Finally, both stories provide interesting viewpoints on the relationship between Kenichi and Michi/Tima. In the manga, it was little more than a brief friendship, erected mostly for the purpose of indulging children in the fantasy of how awesome it would be to have a best friend with superpowers. The anime softens Kenichi's slightly arrogant personality, necessarily making him the nice guy to Rock's mean guy, and adding much needed philosophical tension to their single face-to-face confrontation (which is, by the way, the only time Kenichi attacks anyone in the whole film).

Nevertheless, it is in the final moments that the movie shows the deepest change in Kenichi's character. When faced with being thrown off of the top of the Ziggurat by a malfunctioning Tima, Ken does not choose, as he does in the manga, to fight her in order to stop her rampage against all of humanity. No, this softer Kenichi calls her name, trying in vain to get her to return to her senses. In the end, just like his manga namesake, the boy is unable to save the girl, but her loss is made even more emotional for viewers with a knowledge of the manga. 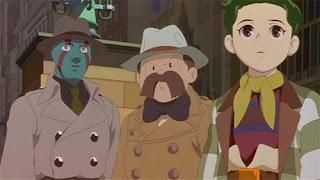 The two stories of the anime and manga, when combined, form a tale of the futility of escaping death that Tezuka surely would have appreciated. That is to say, when Kenichi uses force to stop Michi/Tima from destroying mankind, he cannot save her from death, and when he uses kindness, he again cannot save her. To a viewer experiencing both versions of the story, it feels like Michi/Tima has died twice, and no matter what way we might want Kenichi to try to help her, he will never be able to.

When it comes down to it, Metropolis is much more than a visually stunning, dramatically powerful movie. On its own, it certainly might have wowed audiences, but as a capstone to a readthrough of Tezuka's broad body of work, the film is unbelievably poignant. Simply reading some of Metropolis, Astro Boy, and Black Jack can be enough to provide a simple education in Tezuka's Star System that will greatly enrich a viewing of the Metropolis movie. As with most any Tezuka adaptation, this is a movie that absolutely must be experienced alongside the original version to achieve the full effect.


Quotes, dates, and facts cited from: