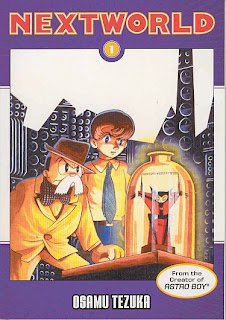 This is a guest review written by Phillip of the Eeeper's Choice Podcast. Thanks, Phillip!

Part of Osamu Tezuka’s "Science Fiction Trilogy," comprised of Nextworld, Lost World, and Metropolis, Nextworld serves as a cautionary tale of using science for the wrong reasons and what unchecked warring could do to the human race. First published in 1951, the two-volume series begins when Professor Yamadano ("played" by Tezuka stock player Dr. Hanamaru) explores Horseshoe Island, an island that the Nation of Star (it’s America, folks) has used as a testing ground for nuclear weapons. After finding a fantastic menagerie of creatures (which he describes as Verderungen, a German word which basically means ‘changed’) that are not part of the natural order, he discovers a small humanoid creature, which he decides to bring to the Nation of Star’s international conference on atomic energy to prove that atomic weapons are wrong to use. Unfortunately, due to interference from a certain Detective Mustachio (Tezuka stock player Higeoyaji), the creature escapes, an invisible hand carries off Mustachio, and Yamadano is left alone. Meanwhile, at the conference, the Professor’s attempt to warn the world is all for nothing as the Nation of Star and the Uran Federation (it’s Russia) squabble and bicker about whether or not nuclear weapons are necessary.

It is into this world we are thrown headfirst by Tezuka from his 50’s output, marked for its exploration of the themes of science versus man and identity exploration. Reading the first volume, you would never assume that the childish squabble that breaks out at the conference could be matched by the sight of enormous battleships trying to level one another, but maybe there’s a weird parallel between the two concepts. The two big nations fight and bark at each other like a pair of spoiled children, so their encounters with each other really are the same only magnified. As with Metropolis, the different strands of the story are initially taken at face value with no real significance as to the gravity of the situation the characters find themselves in. Only as the volume closes do we realise the magnitude that some characters’ choices have on people. Now, you can read as much or as little as you like into the story, but I always suspect that the author has more going on than simple gags or people behaving irrationally (even though the former does happen).

Nowhere is Tezuka’s ability to throw you off more highlighted than the character of Poponyo. A childhood friend of Ivan Redonov, the son of the Uran Federation’s ambassador to the Nation Of Star, she is — on first inspection — a happy go lucky sort of girl with nothing but love for her friend. Too bad she works as the manager of the Underground Factory, a facility run in the Uran Federation by the Ministry of Science with prisoners as slave labor. Working people into the floor, she sees no reason to go easier on the prisoners except when Ivan makes her do it. Here is a character that should be living life to its fullest, and in fact Tezuka inserts another character called Cocoa who does live the life that Poponyo should have, but who will never know anything except how to hurt other people. But Dr. Tezuka doesn’t simply make his heroes heroic and his villains villainous. One of the manipulators of the story, Ambassador Redonov, is seen writing poignantly to his son Ivan on the boy’s fifteenth birthday to let him know that he is thinking of him and that he loves him. Redonov knows what asking the boy to go to the underground factory will mean to Ivan but he asks nevertheless because he only wants what is best for him.

Tezuka would again visit the idea of nations having weapons that should never be deployed against anyone on a more personal level with 1976’s MW and in a more general way with 1949’s Metropolis with scientific progress for scientific progress’ sake. But here, instead of us doing it to ourselves, we are doing it to others first.

As the manga draws to a close Tezuka invokes the Bible and the story of Noah as the world of the Fumoon, the creatures Yamadano found on the island, and the world of humans come crashing into one another. As the two groups prepare to fight, it is clear that humanity is hopelessly outmatched even before the fight has begun, and this is not an underdog kind of fight we are witnessing. Using a simple peasant village people as his example, the villagers ask their priest why their world will be washed away in God’s final judgment when they themselves were a peaceful people and had never done any harm to anyone. Maybe this is Tezuka’s way of saying that when men play God in life and death decisions with the world in the balance, it’s the little people who ultimately pay the highest prices.

On a personal note, Dark Horse have included an explanation for how certain "people from Africa and Southeast Asia," as depicted by the author, are presented without changes. They claim that they understand how people could be upset by such depictions, but they have released it unchanged so that people can get an understanding of how the world viewed certain groups in that era. I find it ironic that Tezuka and Tezuka Productions, people who the larger manga/anime audience have ignored, would go to the trouble to explain themselves when there are a slew of popular artists and writers working today who depict people from other countries any way they chose (for example, all blonde girls from America are presented as being somehow "easy") and don’t apologize for it. Were there more like Tezuka, the experience we have as readers and viewers would be greatly enriched.


This review is based on a retail copy of the Dark Horse manga purchased by the reviewer.