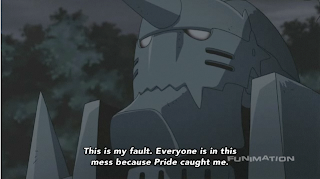 FMA2 continues to separate Ed and Al, this time employing the latter as babysitter for Pride inside a small soil dome. If you compare this to FMA1, when Al is kidnapped by Envy just after seeing his mother’s visage destroyed by Ed, a number of ways in which Al is a much stronger character in FMA2 is evident.

In FMA1, a bound Al finds himself a hostage of the homunculi and does absolutely nothing aside from throwing a slight tantrum trying to turn Envy against Dante (FMA1’s “Father/Dwarf in a Flask”). As a psychological attack, this holds true to the head-game nature of that series. It is here that Al ruminates about all of his near-death encounters as well as the souls he now embodies as the Philosopher’s Stone, almost resigning himself to the death which he thinks he’s facing. Again, this plays to the dramatically emotional nature sustained throughout this series. Al is constantly portrayed as the weakest link in the hero chain, so making him the damsel in distress is fitting. That does not stop the situation from being disappointing when compared to the wonderfully (comparatively) three-dimensional FMA2 Al.

FMA2’s Al comes up with a plan, with an assist from Hohenheim, to hold Pride hostage so that he will be isolated from the big battle on The Promised Day. During playtime with Pride, Al also has the courage to lecture the homunculus on denigrating humans. This holds true to the sociological themes running throughout the series pertaining to species dominance. One must also point out an inner strength exhibited by Al, whose very consciousness is slipping in and out, of using his own (self-viewed) handicap — the absence of a real body — as the wining factor in the “test of endurance” that he’s locked into with Pride.

Not only are the situations reversed in terms of who captures whom, but the nature of homunculus nomenclature lends a bit of fascinating diversity as well. In FMA1, Envy — Hohenheim’s bastard son — captures Al and no doubt enjoys every second of lording over him that he’s enduring the emotional pain of being separated from his brother and can do nothing to avoid being subject to the master’s whim as a simple usable ingredient. In FMA2, Al cuts Pride down to size by lording the fact that mere humans have managed to interfere with homunculus plans and decisively trap him. Adding to FMA2’s impressiveness is the fact that Pride is dumbfounded by the Fuhrer’s wife’s sense of selflessness (personifying his name so to speak).

Similarities are not absent however. In both series, Al cannot not be mortally threatened by the homunculi because he is either the fabled Philosopher’s Stone (FMA1) or an important sacrifice that will go into making one (FMA2). On the funny side of things, in each of the Al-captured scenarios, the homunculus confined with Al loves playing with his empty head, either by kicking it off (Envy, FMA1) or beating it ominously like a rhythmic drum in a Japanese play (Pride, FMA2).

Lastly, one cannot overlook the difference of Mustang’s staged coup, which is more guerilla in nature as opposed to FMA1, where he turns a portion of the Fuhrer’s factions back on Central. Of course this is still possible with Ms. Armstrong sitting amongst the Fuhrer’s former cabinet in presence of Father and the Eastern forces still loyal to Mustang (as alluded to by Wrath before his train went boom). As FMA1 is concentrated on the Elric’s struggle, the political strife of the state, as mentioned previously, serves as more of a backdrop or convenient plot device than any statement in and of itself (especially taking into account how glossed-over the re-alignment with rebel forces is). FMA2 has spread its rebels thin and depicts each faction thusly, making for one hell of a believably risky coup d’etat.