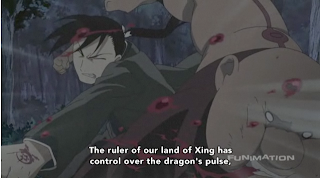 Watch Episode 48 – The Oath in the Tunnel

I don’t think any episode of either series has ever gone by as quickly for me as this one. I regret each blink, because every shutter-like moment means I missed something awesome somewhere.

Wrath’s murder of Lust in FMA1 can be likened to Gluttony’s death at Pride’s dark hands in FMA2, but only regarding its homunculus vs. homunculus nature. FMA1’s scene is one fought over issues of betrayal, whereas FMA2’s scene comes out of a desperate move to combine resources in order to win a fight. That being said, FMA1 never directly combined homunculi, but FMA2 makes a fearsome enemy out of the new mega-Pride who, to supplement his own fantastic shadow puppetry and life force, absorbs Gluttony’s sense of smell and ravenous hunger as well as his remaining life, which was whittled down via relentless attacks from Lan Fan and Ling.

What the differences so readily point out is the inherent values behind each series: the varying consequences of individuality. In FMA1, a cohesive bond between people was seen as the epitome of strength, whereas it always painted individuality as pointed towards trouble or death. FMA2, however, has been rather centered around the separation and building of characters outside of the comfort zone of trusted alliances. This brings us to the namesake scene for this episode.

The rather understated reunion of Mustang and his trusted elite manages to be rousing and heartening through an overwhelming sense of conviction in the name of faith for comrades. (A sly visual metaphor for this can be seen in the warm reaction of Black Hayate to Mustang’s hand.) This kind of “absence makes the heart grow fonder” could not have been possible without FMA2’s dedication to growing characters’ individualities, and now that unspoken emotional cohesion can be effectively and believably put to use in solidifying resolve to stage a political coup. This starkly contrasts FMA1, wherein Mustang and company were never separated and always acted as a cohesive cell. By setting up the coup in this manner, FMA2 makes the whole situation a much more three-dimensional event than FMA1, which more or less used it as a backdrop or setting for the forging of a solid relationship between Ed and Mustang.