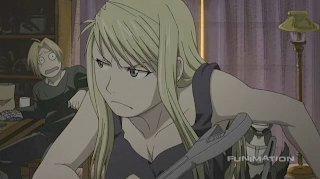 One of the most brilliant things this series is doing, no matter how disheartening, is the physical separation being kept between Ed and Al. And the second scene, where Ed and company accidentally meet up with Winry and her escort, makes a wonderful show-don’t-tell move. Upon finding out that Al is near, Ed immediately jumps from his chair and starts toward the door. Of course viewers know where he’s going, but then Ed stops. There’s much implication in this. Ed knows his and Al’s paths, which are destined to intersect (if only in purpose), must remain separate for the time being due to circumstances beyond his control, and Ed recognizes that rash action cannot be made for selfish contentment (i.e. reuniting with Al) in order to attain the goal directly before them: stopping the homunculi.

This is in contrast to FMA1, which never let the brothers develop on their own. And while that made the bond enviable and the devotion heartwarming, the fact that the bothers were (almost) never apart meant they never had a chance to become their own characters or grow in relation to each other. More or less, FMA1’s Elric brothers were one and the same with a smattering of internal conflicts between their collective conscious. Moreover, FMA2 has shown a degree of growing independence that fosters a trust betwixt the two brothers that FMA1 never required. Here in FMA2, Ed and Al are conspirators, plotters — chess players who can only see their own pieces while trying to play the same game against a nigh-omnipotent opponent — furthering the strategic nature of this series.

The ways in which FMA2 continue to use Greed are also impressive. Aside from aspects already mentioned in previous Diaries, these last two episodes of FMA2 have shed light on why Greed was such a threat to the other homunculi and sealed away: selfishness. He wants it all and all to himself. Each mean he employs is one aimed at fulfilling his own desires, regardless of what anyone else wants — a blatant anarchistic threat to any organized plot. But as this episode has Greed spell out to Ed, greed can be utilized for good and evil alike. As easy as switching a lower-case g to a capital G, this can be taken as metaphor for how the series is justifying Greed’s alliance with Ed. This is in line with FMA2’s strategy-based build but also parallels FMA1 Lust’s selfish interest in helping the boys.

And last but not least, if we are to believe Bradley was actually killed by a little explosion and subsequent fall into a river, then FMA2 polishes him off via a team effort pulled off by ancillary characters instead of mano-a-mano a la FMA1’s Mustang vs. Pride. More importantly, FMA2’s route bolsters the human vs. homunculus theme as opposed to FMA1’s alchemist vs. homunculus. This may seem trite, but if we’re looking into the sociopolitical aspect of the inference, then what FMA2 does is stress the power of the ordinary people have over fantastic forces (government), while FMA1 used fantasy to counter fantasy. I think this is the essence of what makes the blood race when watching FMA2. Aside from its well-developed action scenes, the amount of adversity faced by the ordinary characters lets un-fantastic viewers see a bit of themselves as major factors in the revolution.