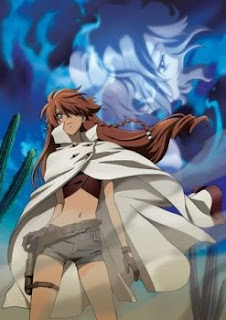 Read our review of Part 1!

Thereâs definitely a division between the last box set and this one, an accelerated (though far from rushed) pacing and linked plot advancement, that makes episodes 14-25 a little more interesting, if only at some slight expense of the seriesâ sense of patient humor. Sight gags and the female leadsâ charm remain but are relied upon far less often to carry the series, which now leverages viewersâ existing investment in Nadie and Ellis to bring weight to the involvement and interaction of ancillary characters such as Rosenberg, LA, Blue Eyes, and Ricardo.

The formulaic town stops are also given a tweak to develop relationships between Nadie, Ellis, Ricardo, and Lirio. You might get sick at the predictability of Ricardo encounters, but formulaic does not mean boring. Thereâs a gradual (if only predictably episodic) humanization budding beneath the naÃ¯ve Ellis that blossoms quite believably. Her foil, the downright creepy gothic tween LA (the other human-created witch/stalker/assassin), likewise gets a chance to be more than the ruffles of his shirt and empty intimidations. His character, like Ellis, grows via confrontations with his guardian figure on a journey of self-realization.

A friend once noted that every comedic anime had its mandated hot springs episode, and I had to laugh at how brilliantly Bruja works its in (as well as the fun the writers evidently had in doing so). This is in addition to other clichÃ© episodes, such as the hotel that turns out to be an abandoned (and now haunted) house as well as what Iâd like to refer to as the bounty hunter code of ethics concerning the pseudo-ending. None of these detract from Bruja, because this series relies upon nothing but its characters to sustain itself. Thus there is no storyline too out there, no episode impugnable, because the only way the series can fail is if the characters do not develop.

That is what I mean by pseudo-ending, because Bruja actually has two. The first serves to wrap up plot and journey, while the second completes the characters. Unlike most extended finales, thereâs an unsaid sorrow that should permeate the viewerâs consciousness. This is due to nothing short of the love developed between Nadie and Ellis throughout their experiences and the culmination of so much time on the road. In short, the series makes it evident that these characters know each other and are sacrificing for each other, even though neither would ask the other to do so for them. The result, if you like character-driven anime, is a bit of a tearjerker, as you realize that everything ends up exactly as it should, and youâve been privy to some pretty intimate feeling captured though the two main charactersâ realistic dialogue and some extraordinary situations.

This anime may not be for everyone. But if you like lighter stories that develop their characters with charm, humor, and a bit of subtlety, Bruja, if for nothing else, is a trip worth stealing a jeep for the privilege of taking friends of similar interest along for the ride.


This review is based on a FUNimation box set purchased by the reviewer.