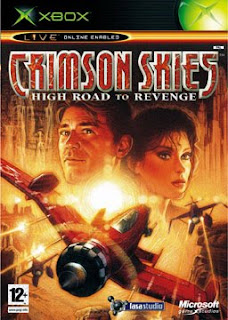 When it came out at the tail end of 2003, many touted Crimson Skies: High Road to Revenge for the Xbox as being one of the best online multiplayer games, and it’s easy to see why. Picture a near-perfect flying game, one that sheds the choppy gameplay of its flight- and battle-simulator brethren and leverages a parallel US history as a backdrop for an Indiana Jones-esque sky piracy adventure. Now picture 20 of your nearest and dearest, or a complete group of strangers, filling the sky you’re all flying through with bullets, rockets, and the smoke of the fallen in an online orgy of aerial violence made possible via game variants such as (team and free-for-all) Dogfight and Keep Away, Capture the Flag, and Gun Heist. Add to this a ranking system, from 1-6 dice dots and the much sought after Ace star, entirely dependent on how often you and others play and how well you fare, and you’ll see why this game was so popular amongst the online crowd. This popularity was further added to by the abundant and FREE downloadable content (planes, levels, and online game types).

If you were unfortunate enough to not have either an Xbox Live membership or anyone to play with on the same console or via system link, Crimson Skies: HRR campaign mode is where the fun lives (especially today, when the online games are naught but virtual ghost towns, reminders of the fun which was had in years past). Story mode lets players wear Fortune Hunter Nathan Zachary’s flight jacket and take the controls of ten inventively designed planes, loosely based off of WWII-era birds of prey, which can be used throughout the game (or any subsequent run-through). There are five and a half geographical settings (the half being allotted for Chicago's tranformation into fhe final Windy City stage), each of which contain several unique open-areas with a range of standard and optional missions. Four difficulty settings, the last of which can be unlocked after beating Hard, lend to replayability, and Ultra-Hard can give even veterans a run for their money (or force them to use the available cheat codes).

The graphics, both in cut scenes and during gameplay, are fantastic for that generation of console and still hold up today if playing on a Standard Definition TV. The sole exception to the quality is that of the somewhat jerky body movements and out-of-ratio-rendered body parts (hands in particular) in cut scenes. Furthermore, the game was not made for High Definition, but the only quality lacking is seen in the cut scenes, which are humorous and well-written but luckily not the meat of this game. Xbox 360 compatibility is a wonderful thing, but the transition was not flawless. Though far from hindering, slight visual glitches that detract from the perfection of the game’s original incarnation occur occasionally during play. If you’ve got an original Xbox, there are no problems at all.

Crimson Skies: HRR can be found for $2.99 at GameStop or EB Games that have yet to liquidate their used Xbox originals cache, or you can download it via the Xbox Live Marketplace for 1200 MS Points ($15.00). I’ve not known anyone who’s done the latter, so I’m not sure if that fixes any of the aforementioned slight visual glitches. Easy to play and challenging to master, this humorous and fun game earns a permanent spot in any action-lover's collection.


This review is based on an Xbox retail release purchased by the reviewer.