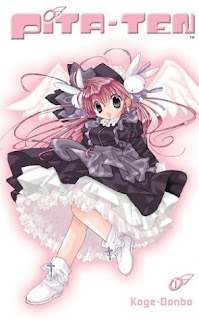 So, Pita Ten. I am going to share a small confession with you — this is an incomplete review. Sorry. I have been on the verge of buying the eighth and final volume of this manga for a year but simply never have. After rereading the first seven with the intent of reviewing, I don't think I will pick it up after all, and I'll explain why.

First, a word of warning that may turn you off this manga straight away: the series is melodramatic, to an almost horrifying degree. The emotional hooks of the story get deep into your skin and threaten to remove chunks of you with each passing event. It really pricks at your tear ducts, and if you wanted a manga to reach out to you in such a manner, it is well worth a read.

The characters are well realized and manage to skirt the danger of coming off as rote, two-dimensional or transparent tropes due to the tangible air of authenticity that they are imbued with — no mean feat when there is an angel, a demon, and a talking cat running about in the foreground. The characters also get the lion’s share of the love in the art department, and if I ever see a large scale art book by the author at a con, I intend to snap it up; you can tell she has real love for her drawn charges and this shows clearly on the page.

The art is honestly breathtaking in its detail, but has some caveats; while wondrous at first glance, the sheer amount of stuff on the page can become stifling after an extended reading session. This can be especially jarring when the backgrounds take a sudden holiday, leaving you with characters floating in blank space while still proudly sporting their normal level of detail. The sad thing is that I would probably not notice this fact were it not for the detail when the backgrounds are present. So, why has it taken a year for me to go back and forth on buying the final volume? I already have seven of them! Well, it's the plot.

It mixes supernatural elements and heartfelt emotion sublimely with an almost personal honesty that is refreshing to read. Pita Ten follows the prime rule of melodrama in that you need to run full tilt with it if you are going to use it at all, and is deeply engaging as a result. As mentioned above, it gets its hooks into you.

The problem? The main characters are hardly middle school-age kids! The sheer amount of blight and heart rending drama these tykes go through ends up shattering the illusion, both with incredulity and horror. By the time I stopped reading, there was simply too much drama flying around and impacting the characters to maintain my suspension of disbelief.

You wonder why these kids go through pain so acute and well-realized on the page — what is keeping them from drowning themselves in a nearby river? Incredulity follows from a sudden disconnect with the characters. Since when do people brood and over-analyze so much and over such alien events?

The main problems with my admittedly sheltered upbringing were bullies and being beaten at conkers, not family welfare struggles and love affairs with a supernatural girl wearing a crazy hat. To be fair, my childhood could have done with more crazy hats and sarcastic talking cats.

With this problem, the spell is broken and the story loses all interaction and impact — you are left with a drawing of children crying for unfathomable reasons. All the magic leaves the manga and with it all interest in continuing. For me this happened in volume seven. Rereading has sadly not cured this ailment, as dearly as I wish it had — I just can't get over the gulf in belief that has opened up.

Up until this point I was utterly sold on the series, and now not at all. I have been told by sources I trust that the eighth and final volume will sew it all up nicely, but I just can’t bring myself to buy it because the whole package feels so alien now. It’s a real, honest shame as I was deeply enjoying the series.

If you have a decent stomach for melodrama then I heartily recommended Pita Ten to you — but if, while reading this, you find yourself wrinkling your nose at the level of suspension of disbelief you are expected to exhibit, then it is best to leave well alone.


This review is based on a set of Tokyopop graphic novels purchased by the reviewer.