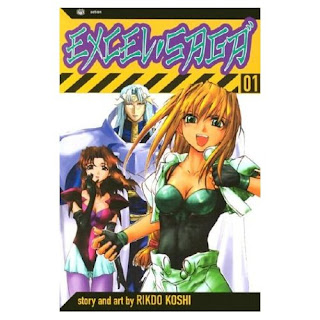 First, a very brief disclaimer and admission, if you will indulge me: Excel Saga was my first manga series, which I started to read years ago after being shown some of the TV anime by a good friend. I was instantly hooked and hurriedly bought all of the available volumes to the detriment of my meager funds. It is also responsible for the only tiny anime figurine I will probably ever purchase.

The titular character, Excel, is a member of ACROSS, an organization dedicated to taking over the world, starting with the conquest of a moderately-sized city. One step at a time, y'know. The manga focuses on the organization, its opponents, and the innocent bystanders who are locked in a bizarre and rapidly escalating struggle for supremacy. The plot is rarely taken seriously, treated instead as a springboard for jokes and crazy sequences which keep the events portrayed fresh, as well as making the reader sit up and take notice when something serious does happen amongst the unrelenting humor.

The plot constantly raises questions, but provides few answers, dropping various hints and details all the time. It is entirely up to the reader to try and put these elements together and fathom the deeper intrigues of the plot, helping to draw you into the frankly absurd action. The sheer amount of incompletely or simply unanswered questions can lead to a constant state of cliffhanger that, while a great source of tension in the series, is also frankly exhausting. This is especially evident in later volumes wherein, although you can make educated guesses, there are no definitive answers to some rather large questions.

The reason this aspect never becomes a true deal-breaker is that the focus on comedy is never forgotten — throwaway lines, crazy events, and a plethora of background gags are packed into each page and make it an honest joy to read. The localization is impeccable, including a full afterword from the editors — who clearly love the title — that also provides interesting background material to enrich the reading experience.

The art in Excel Saga is exceptional, especially in the sheer amount of painstaking detail that has clearly been invested into each and every panel, both the well-crafted settings and the characters who prance around inside them. The level of depth on display really helps to draw you in; not just simple backgrounds, but entire drawn scenes and panoramas set the stage. In addition, the sheer diversity of the art for the characters ensures each actor is a real individual, some of whom are drawn in different art styles entirely for their humorous potential. The art shows flair in other ways as well, playing around with ways of displaying speech, layout and perspective to keep the whole thing fresh.

All this served to draw me in completely, with one small caveat that is probably only the concern of wet drips like me: the level of fanservice creeps up as the series continues, although it is still rather tame and thankfully focused on realistic adult characters.

The characters are a weird bunch and only get stranger as the series goes on, simply because they go through so much crazy junk. By the time you get to the latest volume, some of the more influential players now have a back-story so convoluted it would make a daytime soap opera character say “Damn, that's messed up!” Sadly, some of this development comes in the form of the classic standby amnesia, although this is well handled, to the series’ benefit.

A lot of the characters are based on cleverly subverted tropes, for example: the energetic, hard-working, but not especially bright girl, the sickly girl, and the lolita robot, among others. Even with this, all characters are fully fleshed-out, with both straight-faced and comical aspects, so they not only feel like a real part of the series but remain enjoyable to follow.

There are many characters active in the storyline at any one time and any possible confusion that could arise is neatly sidestepped by the act of focusing on one particular group or perspective at a time, thus saving your poor brain-meats from melting. This also creates a deeper appreciation of each of the characters and their personal input into the storyline; they all get their special time in the spotlight. This is especially true of the more conniving or enigmatic characters who rarely reveal their true thoughts when others are about, ratcheting up the tension in the series. 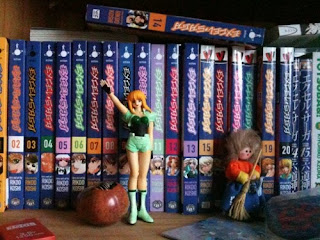 The series is amazing to re-visit, and a surprising number of jokes and situations remain fresh even after the second or third reading. I kept finding small jokes or hits I had not seen the previous time though, and rediscovering events that I had completely forgotten about. Even on my personal fourth reading I found brand new details.

There are complaints to make about Excel Saga, and they are not small ones, to be honest. After 20 volumes, the plotline shows no sign of resolving itself any time soon — in addition there are (at the time of this writing) 23 volumes total released in Japan and none of these show signs of wrapping up the storyline either. The pacing, despite never feeling slow while reading, certainly is — it takes a rather long time to get through a volume and while this provides good value it can also wear you out — especially when the plot refuses to answer some of the more burning questions. One particular time, I was reading while cooking dinner (had to fit it in somewhere) and after seeing a hidden hint that pointed to a later plot occurrence, I said something along the lines of “Oh, damn!” I then ran out to pull another volume or two off of the shelf to check my hunch, leaving my dinner to burn.

Despite the rather daunting length, the entertainment and comedy value of the series is sky-high and engrossing to a fault. Re-reading this series has caused me to lose sleep due to being utterly enraptured, as well as the aforementioned pasta bake that I left to burn.