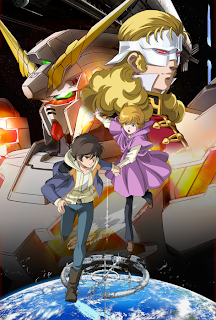 A Bandai Entertainment press release yesterday announced the North American Blu-ray release of Mobile Suit Gundam Unicorn, Sunrise's newest anime series in the long-running Mobile Suit Gundam franchise. The first Blu-ray disc, which is exclusively available for pre-order on Amazon.com right now, will hit retailers on March 12, 2010 (the same day as the Japanese release), and will feature TrueHD 5.1 and Dolby Digital 2.0 sound on both the English and Japanese audio tracks, a 16:9, 1080p video transfer, and ... just one episode of the six-episode OAV. The disc will go for a SRP of $49.98.

Furthermore, to "celebrate" the release of Gundam Unicorn, Bandai Entertainment will be providing six older Gundam series in streaming video format through the Anime News Network, Crunchyroll, and YouTube, starting on February 1. The six series that will be available are Mobile Suit Gundam (the original), Z (Zeta) Gundam, Gundam Wing, Gundam SEED, Gundam SEED Destiny, and Gundam 00. The first season of Gundam 00 is already available on Bandai's YouTube channel, so this announcement might signal a streaming release for the second season, which has only been available so far on the SyFy channel's Ani-Monday block.

Unicorn takes place in the "Universal Century" (UC), the same time period as the original Mobile Suit Gundam, and it is the first UC series since the 2004 CGI project MS IGLOO. The events depicted in Gundam Unicorn are based on the novel of the same name by Harutoshi Fukui, and take place three years after the events of the 1988 film Char's Counterattack.

I'm as excited as the next guy (actually, way more excited than the next guy) about Bandai streaming old Gundam shows, especially since I'm currently playing catch-up, trying to watch a bunch of the old UC Gundam series. Nevertheless, the release strategy for the Unicorn Blu-ray is simply unforgivable. $50 for a single OAV episode means that the entire show (whose six 50-minute episodes bring its runtime to around that of a 13-episode series) will cost an American a whopping $300 for the Blu-ray release. For what amounts to a 13-episode anime!

Bandai's Unicorn release is following the same strategy of most Japanese anime DVD releases: very few episodes on a disc with a criminally high price point. Because of Bandai's notorious fear of "reverse importation" (Japanese buying the significantly cheaper American discs), they are simultaneously releasing identical Blu-rays, which will certainly stop the few Japanese fans who actually reverse import anime DVDs. Coincidentally, it will also stop most American fans from purchasing this release, which completely defeats the purpose, as it were.

Details regarding the standard DVD release of Unicorn (if any) and more information on the streaming shows have not been released yet, but I will get in contact with Bandai PR to try to iron out some of the finer points of the announcement.

January 14, 2010 – Bandai Visual Japan announced today that Amazon.com will release the Mobile Suit Gundam UC(Unicorn) Vol.1 Blu-ray with a two-month exclusive window in North America under the “Honneamise” label. Amazon.com will be taking pre-orders starting on January 10 with a street date of March 12, 2010 at a SRP of $49.98. Bandai Entertainment Inc. distributes this Blu-ray product for Bandai Visual Japan.

Since its inception in 1979, the Gundam franchise is considered the introduction of the giant robot or “Mecha” genre in the U.S. Mobile Suit Gundam UC is a series of popular novels by Harutoshi Fukui, which was originally serialized from 2006 to June 2009 in the monthly Gundam Ace magazine by Kadokawa. Ten volumes of the novel have sold over 2 million copies. The story is set in Universal Century, three years after the events of the film Char’s Counterattack. The series will be comprised of six 50-minute episodes directed by Kazuhiro Furuhashi.

The Blu-ray will feature Episode One with Japanese and English TrueHD 5.1 and Japanese and English Dolby Digital 2.0 audio with a 16:9 / 1080P High Definition transfer. Subtitle tracks will include Japanese, English, French, Spanish, and Chinese (in both Cantonese and Mandarin). The English voice cast features the talents of Steve Cannon, Stephanie Sheh, Rachael Lillis, Tara Platt, and others.

*streaming information will be available on February 1.