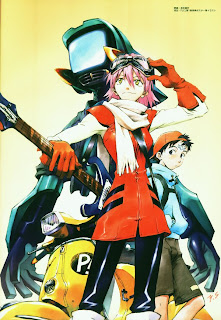 American anime distributor FUNimation, in their quest to license EVERYTHING EVER, acquired the rights to Production I.G and Gainax's OAV series FLCL today. This continues the trend of the distributor picking up licenses for series that were dropped by out-of-business or defunct anime distributors. [Correction: FLCL was distributed by Synch-Point, not Geneon Entertainment]

For those of you who hopped on the FLCL train a long time ago, this news is probably a little bittersweet. After all, the old Synch-Point release featured two episodes on each of three discs, and the entire set went for a whopping $60 – double the price of some of FUNimation's newer box sets for 13- or 26-episode series. Now FUNimation has confirmed a box set for the series that will likely be somewhere in the range of $30, which is great for people like me who waited to buy FLCL, but no so great for people who already paid for it.

The series will drop sometime in "late 2010" on both DVD and Blu-ray. Furthermore, according to FUNimation's Twitter account, "FLCL has been dubbed before and we think it's awesome. As soon as I know for sure if we will go with the old dub or new, you guys will know." So it's a safe prediction that we won't be hearing a new English dub, but we'll update this post with definite information if and when we hear about it. [EDIT: Yes, FUNimation will use the original Synch-Point dub.]