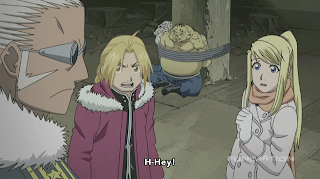 We apologize for the lateness of the article. FUNimation's video stream did not go up when it was scheduled to, so Ink had to wait nearly a week to finally watch Episode 39.

I’m loving Winry’s character more and more vs. her FMA1 incarnation. Stronger and more psychologically driven, she has to face her parents’ killer in ways FMA1 never presented. Consequently this rounds out her character, compared to FMA1’s static (though diversely utilized) role of emotional support, comic relief, and love interest.

Also of note in this episode is an interesting and wonderful use of Milo to bring about the notion of non-violent revolution (changing of minds through his Ishvalan presence in the Armestrian armed forces), but somewhat self-defeating seeing as where he’s positioned is just about as marginalized as one could be. At the same time, however, this is acknowledged by the series with his line, “There’s no telling how long it will take,” showing a well thought-out back-story and intention. FMA1 never mulled over Ishvalan reintegration, and in some ways this evoked a more real-world sense of haplessness for race relations as a theme. FMA1 constantly moved Ishvalans about like refugees, only showing main characters as such or vengeful serial killers. The former carries a wonderfully heavier emotional toll, and the latter sadly dumbs it down to a stereotype. By itself, this comparison brings up another contrast: use of hope and despair. FMA1 was built on despair and emotional turmoil, using lack of hope in every aspect but one as a drive towards a goal, whereas FMA2 uses the traditional hope as lighthouse beacon to be the carrot for its characters, who have to overcome hurdles of despair.

Milo also brings up, as a result of May and Marcoh’s appearance and plea, one of the more wonderful themes in FMA2: that of research as primary and all-important goal. Even though, in the same series, we witnessed Hawkeye’s father claiming to have reached edification’s epitome concerning alchemy, the series now relies on the combining of techniques (alchemy/alkahestry) to push research and education further than previously envisioned. This can be combined with Milo’s other lesson of cultural tolerance to show that progress can always be made and that nothing we know is the end of what is possible. This sets a tone far different from FMA1, which lived entirely within one set of boundaries (until the last few episodes, which did not so much as defy those confines as fill in a opportunistic gap).

Another nice diversion from FMA1 is that of Al ’s armor possibly rejecting his implanted soul (or as the series has it, his body reaching out for his soul). This sets up a stress on time and will be interesting to see how FMA2 handles the yet-to-be-defined timetable. Will Al be drawn back to the gate, leaving Ed alone and on a mission to retrieve him? Or does this signal the beginning of the transition towards the final stretch of this anime? Manga readers, you know… so don’t tell. The important part is that FMA2 is so flexible and has such well-construed characters that either diversion is possible, which mirrors the mood of FMA1’s final 2 episodes.