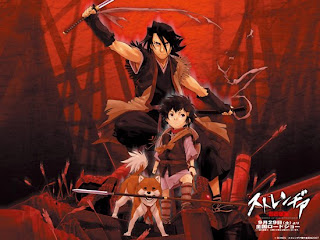 Today we're talking about Sword of the Stranger, a samurai action anime created by studio BONES, directed by first-time director Masahiro Ando, and distributed in the United States by Bandai Entertainment. Mitchy and I loved this movie to death (a state experienced by more than half its cast), so this episode turned out quite a lot like our Golgo 13 podcast.

I'm not sure just yet what we'll be doing next episode, but we definitely want to talk some video games again sometime soon, and our 25th episode milestone IS right around the corner...

[00:37] EDIT: I accidentally left in a piece from last episode. This bit is just Evan and Mitchy introducing themselves.

[01:28] We start What'cha Been Doing? with Mitchy talking about video game novels, like the Metal Gear Solid 2 novel.

[04:26] Mitchy beat Mass Effect for the fourth time, and Evan's playing it the first time. We both like it, but Evan's still feeling out the game, since he's only a few hours in. Like a true cynic, Evan starts his discussion of Mass Effect with what he doesn't like about it, even though his overall impression is positive.

[06:35] Mitchy is playing Dragon Age: Origins, a.k.a. "Knights in Shining Armor of the Old Republic." Cue ensuing discussion of morality systems, Far Cry 2, and a mystery game that Mitchy isn't allowed to name.

[08:47] Even though it's mo, Mitchy is considering watching Azumanga Daioh. Evan recommends it before pointing out that it's totally made for pedophiles.

[09:45] Evan watched Irresponsible Captain Tylor, which he calls, with hesitation, a "dramedy." It has a weird harem plot and some annoying twin girls characters, but rest assured, he enjoyed it. Also, he never mentioned it, but it takes place on a spaceship, not a boat.

[11:23] This discussion was supposed to be short, but like all of our discussions, it just kept going. Long story short: Evan and Mitchy both love the XLBA game Splosion Man, but Mitchy can't beat the first boss because he's a baby.

[15:23] Helen McCarthy's The Art of Osamu Tezuka is a great read according to Evan, who just finished reading it. It's got profiles of almost every manga the man ever wrote, and there's a never-before-translated documentary in the back.

[18:32] Review: Oh My God it's Sword of the Stranger! Directed by Masahiro Ando, created by Studio BONES, and forged out of pure awesome.

[19:56] Cue the excited list of the best deaths in this movie. Wrecking ball whip, battle-axe tied to a rope, three-piece staff/scythe combo, and airborne katana. Mitchy's notes are notably more eloquent than Evan's.

[21:47] The plot is really basic. There are Japanese people, Chinese people, and a white dude. IMMORTALITY also.

[23:51] At this point we kind of just start spoiling the best deaths. Again.

[25:48] This movie has a Shiba Inu that kills more people than one of the main characters, and even catches a knife in its teeth.

[26:32] Mitchy really liked the plot, but Evan thinks it's just serviceable. It avoids some clichs and ends up being kind of generic, but a ton of fun.

[28:30] The animation, direction, cinematography, and the MUSIC were all awesome. Goddammit, that music was sooooo good. We go into a long discussion of how beautiful the animation and the background art are, despite the brutality of the violence.

[32:55] The movie isn't gratuitous, and the end of the movie has some great surprise deaths that the camera doesn't linger on. Oh, and the old Chinese guy goes out like a punk.

[36:15] The dub for Sword of the Stranger is actually quite good, and the Chinese people actually speak Chinese, which is pretty cool. Evan's complaint about the subtitles during the dub was actually not a problem on a second viewing. Must have just missed the option or something!

[38:52] Mitchy is in love with this movie, but Evan didn't like it as much because the story is simple and kind of generic. Even so, we both loved it, and agree that it's incredibly fun to watch. Highly recommended.

[42:57] That's the end of the show. Mitchy is currently writing for Official Xbox Magazine, so read some words from him in that fine publication. Also read the FMA: Brotherhood Diaries and our 2009 Staff Picks on Ani-Gamers.

[48:42] A rumination on the paradox of jetpacks and videophones.