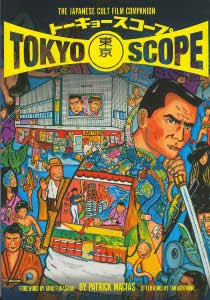 There was a time when anime was a cult phenomenon in the United States. A time when the only way to find episodes of your favorite giant robot show was to seek out either the obscure fansubbing group releasing a low-quality tape of it or the production company that just happened to license a strange show and release it in your local video store. Anime has now moved further into the mainstream, but for fans of Japanese pop culture, the cartoons are only the tip of the iceberg. Beneath the surface of the water is the other 90% of that iceberg, and there lies world of Japanese cult films. Patrick Macias' TokyoScope seeks to bring that world to the surface in a way that few have ever done before.

The book reads like a very fannish, often tongue-in-cheek exploration of every single facet of Japanese cult films, from their production to their promotion and theatrical showings. Japanese history is referenced in detail right next to scans of real posters from '70s triple-feature showings and silly, manic illustrations from Japanese artist Happy Ujihashi. Macias pulls no punches, with short one-page reviews of films of all calibers, ranging from monster movies to yakuza (mobster) flicks to softcore pornos (a.k.a. "pink films"). At the end of each genre-themed chapter, there is a series of extra articles, including interviews, scanned promotional materials, and/or profiles of actors, directors and such.

Macias' knack for storytelling carries the reader through the different chapters, connecting all of them through an omnipresent description of the Shinjuku Showakan theater, a defunct (as of 2002) movie theater originally built in 1932 that specialized in cult films, and was for a time even funded by yazuka, who often visited to watch the latest films about their fictional gangster counterparts. (For more on the Showakan, read August Ragone's writeup of the theater's final show.)

TokyoScope is the kind of book that holds far more information than one person could possibly absorb in one reading, a fact that serves as a reminder of just how much of a wealth of knowledge Patrick Macias is when it comes to Japanese pop culture. However, despite the wide range of genres and films, the focus of the book often circles back to a few major names, including directors Kinju Fukasaku (Fight Without Honor Or Humanity, Battle Royale), Ishiro Honda (Godzilla), and Takashi Miike (Dead Or Alive, Ichi The Killer) and actors Sonny Chiba, Bunta Sugawara, and Tetsuro Tamba. While all of the names might not sink in, even a quick first read of TokyoScope is a fantastic start for any new fan looking to get into the dark and dirty world of Japanese exploitation cinema. It might not add much for longtime fans of the films, but it certainly offers some insight into movies that they might have overlooked.

The book itself is a good size, with large pages and a light weight that makes it perfect for carrying around on the train or bus. Unfortunately it is published in black and white, which significantly ruins the value of having so many wonderful pictures of Japanese films both new and old.

We've now reached a point where anime has become a very noticeable presence in Western culture, so for many the light of animation has eclipsed Japanese live action cinema. In reality, however, there has never been a better time to seek out these films. As fans of Japanese culture seek out more entertainment to sate their apetite, they should reach out not only to the brightly lit halls of Akira Kurosawa, but also to the dimly lit Showakan theater, where the soft underbelly of Japanese cinema once lived. As an inviting gateway into this all-but-forgotten facet of Japanese cultural heritage, TokyoScope is unrivaled.