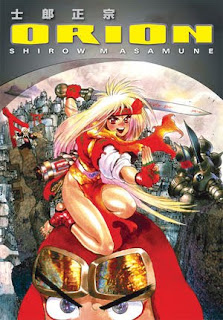 Allow me to be blunt: I did not enjoy reading Orion. Even worse, I read it multiple times because I was determined to get to the bottom of this mad creation. Why on Earth would I do something so terrible to myself? Because lost in all the mire are some excellent elements – it's a shame that reading the complete package feels akin to being punched in the forebrain at infrequent, unpredictable intervals. Let me outline exactly why.

The art is painstakingly crafted, detailed, and sadly a complete slave to the sheer volume of information that the author wants to convey through the drawn page. When they are present, word bubbles are the most important single item on the page, lording it over the other pieces of art (which are similarly drenched in text or symbolism). In between all this busy information is a wealth of well designed and thought out technology and characters, much like any of the author's other works. It's saying something when I find myself hankering for Shirow's typical painstaking asides and details (ten-line footnotes about chainguns, for example) instead of the all-encompassing plot vomit that covers the page.

As a result of the art, the finished page is very demanding to read; anytime these demands made of you feel alien or disjointed, the book falls apart. During these spots I would put the book down to let my rather indignant brain cool off, to let the sea of patched together information drain off before picking the work up again. When, in certain key points, this began to happen every few pages, continuing with the two-hundred-and-fifty-odd-page story felt rather masochistic.

The characters are instantly forgettable, primarily because they are also there exclusively for the service of the plot. Usually such a transparent device would manifest in a bland or very contrived character who would deliver a deus ex machina – for example, the quiet girl from class who can rewind time all of a sudden, just because. Hey, why not? The difference is that the characters in Orion, if transplanted into any other series, would be outstanding characters, shining beacons of craziness who warp the plot around themselves due the the impact of their actions. They are real individuals with crazy designs and motives, but immediately after re-reading the book, I can't for the life of me remember any of them. They exist simply to expel lectures and do bizarre things for the sake of moving the plot along. The plot is driving the characters, not the other, more desirable, way around.

So, the plot – time to talk about it, seeing as it is obviously the main thrust of the work. Giving an extended synopsis would take a lot of words, so I'm going to boil this down to the lowest level I can to illustrate what I believe is being conveyed:

A spunky girl is involved in an bizarre magical accident that makes her the equalizer of all the Karma in the universe. Various interests vie for possession of the girl. After she escapes and begins to absorb all of the bad karma of the world as intended, she realizes how much power she has at her fingertips and so goes a little mad with delusions of grandeur and marriage. This is resolved in a overblown manner with some amazing two-page spreads and the final page tells us that this insane magic-and-technology synthesis world would later become Earth. Somehow a few side plots were resolved at the same time too. Great! I won't tell you how many readings this small level of understanding took, particularly due to the problematic brain-overheating key moments mentioned earlier, I'm still not completely sure about the above, but I'm sure as hell not touching the book again to find out.

Orion is not a good manga. It is not fun to read, whether for the art, characters, plotline, or message. There is no justification for purchasing it for the “Oh my god its so wacky!” angle, or even giving it as a joke gift to a friend (who will certainly hold a grudge). The worst part of all this is that it is deceptive – “if only I read that part again, I'd have a better understanding and all would be so much clearer, I know it!" – No, the manga is lying. It won't. Even worse is the nagging feeling that if elements of this manga, such as the characters and the universe itself, were airlifted to safety to star in another work, they would stand out and make for magnificent and engaging storytelling. Instead Shirow leaves his readers with a massive mess.

This item, however, is a monument to the bloody-mindedness and determination of the people at Dark Horse, and especially those who localized it – the reason this manga makes any lick of sense at all is thanks to those good people. Hats off to you, brave warriors.