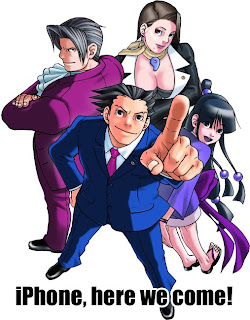 With touch controls, short episodic snippets, and a generally silly premise, the Phoenix Wright: Ace Attorney series seems almost tailor-made for the iPhone platform, so it's no surprise (though it is quite a delight) to hear that Capcom's popular anime-style lawyer game will be coming to Apple's ubiquitous cell phone.

The game has only been announced for Japan so far, and Capcom mobile contents head Takeshi Tezuka did not give either release date or price details. However, he did say that the title would not be a simple port, and might even use the iPhone's "flick" interface to help with selecting commands.

While we have no word yet of a stateside release, such action seems likely considering Capcom's recent decision to port the series (originally released on Nintendo DS in the United States) to Nintendo's WiiWare downloadable content system in both the United States and Japan. The iPhone allows for a leverage of the touch controls of the DS version and the episodic format of the Wii version while bringing the game to an entirely new audience.

[via andriasang via Joystiq]