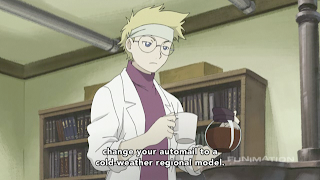 This episode of FMA2 exposed an interesting contrast with FMA1, specifically dealing with Ed’s automail appendages, Al’s armor, and how the mechanical serves as an extension of an individual’s personality. With Al, it’s handled subtly; a simple over-exaggeration of excitement upon being reunited with his head shows how Al’s grown attached to his physical form as an extension of his soul (not to mention the fuss he makes over the fraying/cutting of his “hair”). Why else would he care? Clearly, Al’s come to identify himself as the suit of armor even though he’s fully capable of running around without the helmet (as opposed to not being able to run around if it were a human head that was severed).

Likewise, Ed’s automail envy stems from an encounter with a North City soldier in the previous episode and his learning of the special properties required for automail to not be detrimental to its wearer’s survival in the cold, cold north in this episode. The very fact that the use of the wrong kind of automail in the north would directly and negatively impact its wearer indicates FMA2’s belief in codependency. Ed is recommended to bring his mechanic to Briggs to perform the necessary work and accepts the inherent weakness in his independence with a resigned grunt of acceptance. This shows how much he relies upon his prosthetic arm and leg as well as the mechanic who so lovingly crafted them.

One may recall, in FMA1’s Rush Valley episode, that Winry employs the help of a local automail technician’s adopted daughter to make Ed realize the importance of his automail by means of a catch-me-if-you-can dash throughout the city. By proxy, FMA1 was showing how much Winry needs Ed to need her and how much Ed appreciates his automail. This also places emphasis on Ed rather than Winry, instead of vice-versa as in FMA2's scenario. Early on in the same episode, Winry comments on how remarkable the Rush Valley’s automail technician’s art is in that he made automail prosthetics as extensions of the people who had to use them. The difference between the two series is one of show-don’t-tell, and oddly enough FMA1 is the one at fault for telling too much this time. Well done, FMA2!

Speaking of codependency, there is a major stress on balanced values in this episode. And while growing up (action vs. thought) was the balance for Ed in FMA1, FMA2 is tackling a slightly larger issue: inherited traits. Olivier Mira Armstrong is the first to bring this up via her interest in multiple alchemic techniques (alkahestry). Claiming a more-is-more approach to integration of foreign tactics, she insists the more a soldier knows the better it will do in battle. Fair enough, but how about those in battle? Miles, a multi-ethnic subordinate of Armstrong’s, holds the key here. In discussing his interracial family background, including an Ishvalan grandfather whose genes handed the officer his trademark red irises, Miles reveals the strengths and weaknesses in understanding and insight that come from having mixed blood. Taken further, Armstrong’s assessment of Miles, judging him fit to be trusted and used as a Armestrian soldier (even during the Ishvalan War of Extermination), points out that Miles should be able to draw on all his history to become better than any purebred thanks to his diverse background.