There has been a lot of talk lately about Call of Duty: Modern Warfare 2's controversial "No Russian" scene, in which you control an undercover CIA agent who participates in a terrorist shooting in a Russian airport. The supporters of the design choice love it because it forces you into an uncomfortable, disturbing situation in which you have control over the horrible actions being committed, while its detractors cite the limited setup that the developers at Infinity Ward implemented in introducing the disconcerting scenario.

But what I find interesting is that this scene has received so much controversy even though Far Cry 2, Ubisoft Montreal's open-world first-person shooter released in October of 2008, posed similar questions to "No Russian" (in a more effective manner) in nearly every moment of its gaming experience.

My previous Impressions post about Far Cry 2 mostly discussed its open-world design, but as I moved along in the game, I quickly became aware of a fascinating play on the traditional in-game morality system at work in its plot. To be more specific, even though Far Cry 2 is all about moral choices, it does not actually have a morality system.

I played the game alongside big-name RPG titles like Fable II and Fallout 3, both of which force the player to choose between being "good" or "evil" in many situations. Yes, both are great games, but their binary views on morality are naïve at best. Far Cry 2, on the other hand, presents you with a choice about one-third of the way through the game, forcing you to save either your mercenary buddies or a group of civilians from one of the game's warring factions. You've been through hell with your buddies as you fought your way through mission after mission, but the civilians haven't hurt anyone, and all that they want to do is leave the country for the relative peace and security of the outside world.

Fable II's choices are both clear and immediate; it's final decision is presented as a mystical phenomenon that feels entirely detached from the narrative and characters, and the effect is directly explained by the game. Far Cry 2's analogue to that choice pulls from a similar feeling of connection to virtual characters (buddies in FC2, the dog in Fable), but you must act on your choice for it to come to pass. There is no sequence where you select a sentence in a dialogue box or pick a floating magical card – you have to drive to either the bar (where your friends are fighting) or the church (where the civilians are hiding).

I chose to save the civilians, and that meant driving right past the bar, hearing the gunshots that signaled my friends' deaths. At any point during my drive toward the church, I could have turned back and helped my friends instead. Thus, by giving me the option to turn back, Far Cry 2 has the potential to create a more powerful sense of remorse. My buddies died not because I selected a line of dialogue, but because I drove right past the bar where they were fighting and instead decided to help someone else. 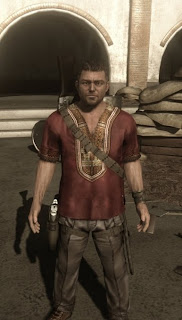 Which was the "right" answer? I honestly believe that such a question should not apply to games that claim to utilize realistic, thought-provoking moral choices. Morality does not work like a computer! It is subject to the pressures of self, environment and opportunity, and it constantly morphs to fit the situation. Whether you choose to destroy a tank of morphine for use on soldiers or destroy a vat of malaria vaccine for use on civilians, what you do will be considered by many to be morally wrong. Even so, it is in the service of eventually killing The Jackal, an arms dealer responsible for the entire war that you are now embroiled in. Both choices propel you through the game, and both involve things generally considered to be "evil," but it is not Far Cry's job to judge the morality of the situation – it is the player's.

Modern Warfare 2 might blur the lines of right and wrong in forcing you to mow down civilians in service of the Greater Good, but Ubisoft Montreal realized a full year earlier that blurring those lines means more than just a controversial scene in an action game. Players must be pulled into the experience for the entire time, surrounded by depravity and ruin, living with the consequences of their own horrible actions. A morality system can never accurately depict the nebulous nature of human morality, and so I believe that games should drop the use of these systems altogether, instead creating scenarios in which players' emotional responses to their actions dictate the morality of those actions.

Please note that this is not a review. It is an analysis of a style of gameplay used in Far Cry 2, and fails to bring up many of the other strengths and shortcomings of the game.