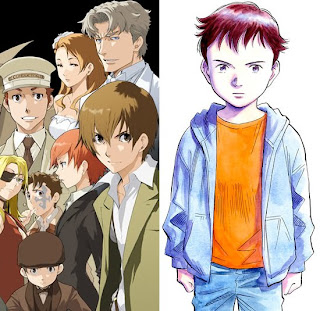 To celebrate the new year, Ani-Gamers will be counting down an unranked Top 14 list of sorts. Every day for a week, starting on Christmas and ending on December 31st, one of our bloggers will post their two favorite titles of the year, whether they are anime, manga, or video games. We now present the choices from editor-in-chief Evan "Vampt Vo" Minto.

Baccano!: I had been looking forward to this show ever since Uncle Yo's review many moons ago, so when FUNimation announced that it would be streaming for free on Hulu, I was pretty excited. As luck would have it, Baccano! did not disappoint. Its combination of a complex, nonlinear story, memorable characters, and thrilling action scenes make it one of the few anime series in recent years that compares favorably to Sunrise's masterpiece Cowboy Bebop. It takes a lot of intense concentration to understand all of the connections between the characters in this mixed-up story of immortal gangsters in Prohibition-era America, but the payoff when it all comes together is more than worth the effort. Go for the dub, though – the American actors' voices bring an effortless sincerity to the characters

Pluto: Being a huge fan of both Osamu Tezuka's original Astro Boy manga and Naoki Urasawa's crime thriller Monster, I was naturally enthralled by Pluto, the adaptation of famous Astro Boy story "The Greatest Robot on Earth" by Urasawa himself. The eight-volume manga adaptation follows the German robot detective Gesicht as he searches for an enigmatic murderer who seems to be singling out and destroying the world's most powerful robots (whose ranks include both Gesicht and Astro). The story takes Tezuka's love of technological innovation, concern for robot-human interactions, and unshakable belief in human dignity, and modernizes them all in the distinctively realistic style of Urasawa. Viz continues to release new volumes into 2010 through their "Signature" line.