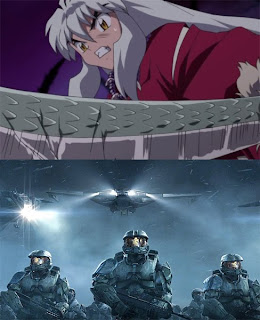 To celebrate the new year, Ani-Gamers will be counting down an unranked Top 14 list of sorts. Every day for a week, starting on Christmas and ending on December 31st, one of our bloggers will post their two favorite titles of the year, whether they are anime, manga, or video games. We now present the choices from reviewer Chris "Kit" Colalella.

InuYasha: The Final Act: Finally, closure comes to one of the most popular anime series of all time. InuYasha: the Final Act takes place right where we left off...sort of. This “series finale” takes only the last twenty-some chapters of the manga and converts them to the anime. The best part about the series is that, for both the Japanese and English dubs, all of the original voice actors were able to return. If you're a fan of this series you are definitely going to want to check this out.

Halo Wars: In my opinion, this was one of the most overlooked games of the year. Halo Wars takes a different approach from its older brothers in the Halo trilogy. Instead this is a real-time strategy game rather than an first-person shooter. You take control of the UNSC Spirit of Fire and its troops as you battle your way through more than a dozen different scenarios each with its own set of both Primary and Secondary Missions. I have to recommend this game to any one who even remotely likes RTS games. Ensemble was able to meld the point and click advantages of a normal RTS with the capabilities of the Xbox 360 seamlessly.