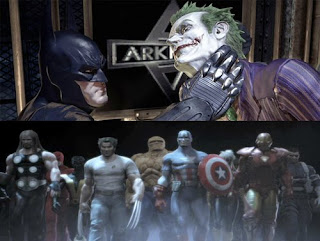 To celebrate the new year, Ani-Gamers will be counting down an unranked Top 14 list of sorts. Every day for a week, starting on Christmas and ending on December 31st, one of our bloggers will post their two favorite titles of 2009, whether they are anime, manga, or video games. We now present the choices from contributing editor Karl "Uncle Yo" Custer.

Batman Arkham Asylum: I say "Batman," you say "Arkham Asylum." Before the quick-to-learn and gadget-immersed gameplay gets discussed, before the fitting graphics get discussed, even before we question how Harley Quinn found an outfit from Hot Topic in her cell, we have to talk about the reuniting of Mark Hamill as the Joker and Kevin Conroy as Batman. This dynamic duo lent their voices to the title characters since the early nineties of Batman: The Animated Series, which laid down the foundations of dramatic, animated noir storytelling. B:AA is a return to the good old days with the processing power of today. For the first time ever, you aren't a blocky black pixel who punches things: you can BE THE BAT to the hilt. One of the most compelling, creepy and satisfying games of the year. I even overlook the disappointing boss fights because of detective mode and the joys of throwing three Bat-a-rangs at once.

Marvel Ultimate Alliance 2: Marvel comic readers remember the Civil War as one of the great years in comics, and to be able to choose sides and play alongside the shattered Avengers is just as much an honor as it was in the first game. Though buggy on the PS2, the Xbox version of this game is loaded with extras and alternate costumes, as well as the sheer joy of getting into intense political dialogues as...the Hulk. Fusion powers make the team-up of Deadpool and Thor just a click away, and the engine that was tested so well in X-Men Legends is finally tweaked to be smoother than ever. Now when I call Johnny Storm "hotpants," the name makes sense and the joke sticks like Spidey to a brick wall.