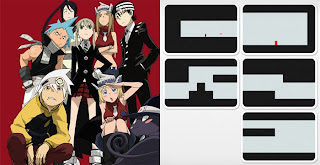 To celebrate the new year, Ani-Gamers will be counting down an unranked Top 14 list of sorts. Every day for a week, starting on Christmas and ending on December 31st, one of our bloggers will post their two favorite titles of 2009, whether they are anime, manga, or video games. We now present the choices from columnist/reviewer Ink.

Soul Eater: Soul Eater revolves around a bunch of kids, classified as anthropomorphic tools of destruction (weapons) or those that wield them (meisters), whose end goal by training at the Death Weapon Meister Academy (DWMA) is to keep the world safe from witches as well as those that feast on human souls for the sheer guilty pleasure of it. The art, while a bit CGI-heavy, offers viewers surrealistic backdrops, and the fight scenes are as interestingly executed as they are engrossing. With the first 3 episodes dedicated to getting to know the 3 main pairings of weapons and meisters, character development isn’t missing either. And it only gets better from there. Do yourself a favor and watch the subbed version; the voice acting is far superior despite the major talent brought on board by FUNimation.

Continuity: A student project created by Ragtime Games, Continuity (www.continuitygame.com) isn’t the three-dimensional puzzle game Valve’s Portal is, but it is just as tricky at times, requires some serious and inventive thought to complete, and is ultimately addictive. This Flash-based game requires players to move (simple run/jump controls) a figure through anywhere between one and eight sliding panels – which can also be maneuvered – to find their way through mazes to get a key and then get to the exit door. Simple, right? But mental tricks are a plenty: sure there may be as many as eight panels, but not all of them have to be used, and inter-panel interaction may require some bending of timing/physics rules on the player's part.