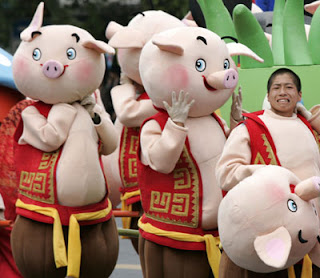 Although this Zenkaikon panel was called "Anime in China," let’s start off with a couple of domestic statistics. In 2006, attendance levels for Otakon and San Diego Comic Con were 23,000 and 114,000, respectively. For the third China International Cartoon & Animation Festival, held in Hangzhou, China, attendance levels topped 430,000. Just shy of half a million people come together over their shared love for Japanese and US culture via animation. But despite these massive numbers, average wait time for tickets (at the door) is only 5 minutes max. Why? Because the army does crowd control, and not just because people such as the provincial head of the communist party stop by. No, that’s not a joke.

On the first day, Industry Day, only company people attend, and that number tops 15,000. Turns out that Hangzhou is the animation capital of China. Imagine that, an entire city taking pride in animation as its most beloved factor. What kind of pride? We’re talking 20 ft tall METAL statues of the convention’s mascot at every major intersection, blimps advertising the convention over the entire city, billboards at every turn, and even a grand cartoon parade through public streets and broadcast live over television, all as an advertisement that the animation festival would be open to the public the next day. Add to all of this the fact that the convention and its happenings dominate the news for each day, and you get a sense of the love (and excellent marketing) that goes into this event.

That love, as well as the awe inspired by such a demonstration, was shared by our panel’s presenter, Kevin McKeever. As head of marketing for Robotech, McKeever was not only there on a commercial mission but also garnered observations as a foreigner visiting for love of animation. The conference is attended, on the first day exclusively and then all throughout, by all toy, animation, and studios/production companies. So, in addition to the custom STRUCTURES built specifically for this year’s con, the organization also offers offices in back for conducting industry-related (as opposed to consumer-related) business.

For the rest of the convention, other attractions include bands performing music (often from the animated shows) on the convention floor; an integrated radio broadcast from a soundproof booth; and Artist’s Alley. The latter offers a distinctive twist from the format US audiences know and love. Instead of individual artists hocking their wares, it features submissions from the public solicited by the convention, which judges them and then puts all selected entries for public display in a room relative to the size of an aircraft hangar.

What about cosplay? Oh, dear god, yes, it exists. Though there is no hall cosplay due to the hazards to costumes and people alike jammed in the densely populated convention center, there is a DAILY masquerade that goes on for 8 hours each day. Also, there are professional cosplayers at booths dedicated to specific shows. But booths are not only there to promote the finished product, there are also booths from all the art schools ready to edify and accept applications from those interested in breaking into the industry.

Then it was time to leave. McKeever and entourage packed up and left the convention to get back home, where, evidently, we have a lot to learn from those in Hangzhou about manifesting our love for anime and animation in such an efficient and affluent manner.