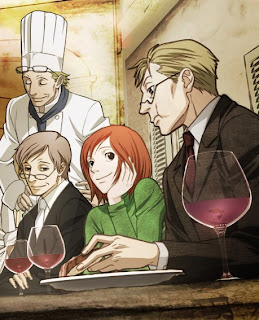 When Ani-Gamers originally mentioned Ristorante Paradiso, Vampt Vo and I dismissed it as a pointless reverse-harem jōsei with little redeeming value. After accidentally watching the first episode four times, I found myself drawn to this slice-of-life romantic comedy and its dry sense of humor. With its simple plot and quiet, likable characters, this 12-episode manga adaptation became my private sanctuary amidst all the ninjas and melodrama of Crunchyroll's spring 2009 season.

Our protagonist is Nicoletta, a young woman visiting Rome on a mission: to find her mother. While wandering the back streets of choppy, blocky 3D animation, she discovers the restaurant Casetta Dell’Orso (meaning “a little bear’s house”), where her mother dates the owner, Lorenzo. Driven by curiosity and bubbling self-righteousness, Nicoletta finds her mother amid a team of older gentlemen, all wearing glasses. Once mother and daughter are reunited, Nicoletta’s mother, free-spirited and childish Olga, agrees to keep their relationship secret from the gentlemen with glasses so as not to ruin her life with Lorenzo. Their solution: give Nicoletta a job at the restaurant, surrounded by gentlemen wearing glasses.

Ordinarily, the glasses detail would mean nothing; but the fact that the writer injects this fact again and again gives the viewer an overdose of kind, older men. Which means somebody must find this appealing.

This is Japan – they can fetishize anything.

Few folks under the age of eighteen are going to enjoy this series. The appeal of a subtle, slow series like Ristorante Paradiso is watching the characters grow, and indeed they do grow. Nicoletta trains diligently as a chef while battling against her intense feelings for one of the waiters, Claudio, a kind divorcer who refuses to remove his old wedding ring. Along the journey, we delve briefly into the pasts of the other five waiters, though very little is actually flashed back to; the director keeps as much in the present as possible.

As mentioned above, the art is sacrificed in favor of sad CG roads and backgrounds, although some of the painted panoramic shots of Rome are very well done, setting the perfect romanticized scene, as if the sun itself was lit by candlelight. The soft focus and dim lighting are overused. Nevertheless, this series is about Italian hospitality, and that means food. The food of Ristorante Paradiso deserves some kind of award...or a layer of Parmesan cheese. The apartments feel lived-in, the restaurant itself feels warm and welcoming. But the character design throw me off: the eyes are TOO big, even compared to shōjo, and the extra-long mouths make the characters have elongated, twisted smiles, like trolls from a children’s book.

Ristorante deals with issues of love, both unrequited and long-lost. While we center on Nicoletta’s inability to openly confess to Claudio (a task that would be the center for any high school shōjo), the story pulls back to reveal every character’s doubt with love, even for the characters who have lasting relationships. Once the main course is cleared, this is a simple and soft series with a wide palette for hospitality, Rome, and men with glasses. There, I’ve proven my sensitive side. Now let us never speak of it again and go back to panties and giant robots.