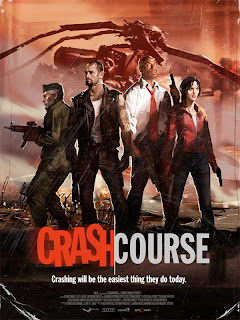 I have always been addicted to the zombie genre, so it was natural that Left 4 Dead made me feel, as the old proverb states, "like a kid in a candy shop." "Crash Course" is the newest offering served up by Valve via DLC for both Xbox 360 and PC.

You start off with a downed chopper in front of you and your teammates beside you, complaining about a zombie pilot. The city is littered with the usual flipped cars, random burning fires, and lots of great dark places for you to get yanked and made a four course meal of. The gameplay is the same fluid shooter experience you have likely come to expect from L4D, with no real tweaks or changes. The level design, however, is excellent. It's a little on the linear side, but it is cramped and filled with obstacles, which really helps to give players that feeling of claustrophobia and total fear.

"Crash Course" suffers from a few setbacks. Sitting at only two chapters of actual gameplay, it's far too short; it only took me and two other people a total of 30 minutes to complete a pick-up game. Versus is a different story altogether though; a few pick up games took us a total of an hour and a half to finish, so that made up for it. For PC gamers this DLC is totally worth it (since its free), but for Xbox gamers it costs the significantly less-free 560 Microsoft points. I don't know if I can blame Valve for this, but I fully believe that I can blame Microsoft. I have also come to find it a little annoying that they didn't make any changes to how you fight the horde. Its the same "bunker down, get ready, and unload mounds and mounds of ammunition into the undead onslaught" pattern.

In your first stand you get to set off a huge cannon attached to a military vehicle to clear your path, and from there it's just rinse, wash, and repeat. Your last stand before completion is turning on a power generator to get the Dawn of the Dead-esque bus off the auto lift. The only moment that's just a bit different is when the power goes out. If you're not near the generator, you actually have to fight your way through the masses of undead flesh to get back and switch it on. (Do it fast enough and you get an achievement.) Left 4 Dead 2 promises to make us work to stop the horde, and I hope Valve follows through on that promise. Don't get me wrong – I love to empty clips into zombies – but after playing for hundreds of hours it can get a little old.

In closing, "Crash Course" is a solid and fun offering to help you pick up the game if it's starting to feel a little stale. However, it's a short-lived run and takes a cut of your MS points for Xbox owners. If you don't mind paying the points, though, I totally recommend that you download this. For PC gamers... what are you waiting for? GET IT!