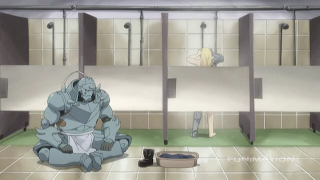 Watch Episode 29 - Struggle of the Fool

Okay, I guessed wrong. No more battle. No more leads into the nature of Hohenheim’s double. Instead, we’re led into the heart of the Homunculi’s operation and something much more dramatically interesting. Ed and Al are brought by Envy directly to Wrath, who’s in conference with Mustang. While FMA1 certainly had its share of sewing the phrase “dog of the military” into its sense of anti-fascist idealism, FMA2 takes it a step further.

Mustang and Ed are put on a level playing field (under Fuhrer Bradley’s thumb), which never happened in FMA1. Wrath is leveraging the safety of loved ones and personal goals – Fuhrer’s status for Mustang, body reclamation for Ed/Al – to keep those deemed important as sacrifices close/available to him. While this touches on the emotional, it’s actually mostly tactical, and very much in line with FMA2’a core philosophy. Mustang has to be a dog to try to overthrow the government, and Ed has to keep his collar because it’s still the most viable way to continue his research. FMA1’s idealism is further diminished in FMA2 by bringing forth the theory that the alchemy exams and certification of state alchemists are solely means with which potential sacrifices may be found.

A nice bit of sentiment shared with FMA1 is shown via FMA2’s Marcoh, when he offers to treat Scar without first seeing him and subsequently suffers an emotional break at the irony. No, FMA1 never offered up this scenario, but its Marcoh was riddled and driven by the guilt that came as a direct result of his Ishvalan involvement. FMA2 rewrites the formula a bit, but brings about a denser and dare I say more effective rendering of guilt. The situation leverages Marcoh’s guilt, healing ability, and fear (through knowledge of Scar’s M.O.) in a singular instance. Sheer poetry I tell ya, although the feeling might only be effective/recognizable if viewers have seen FMA1 previously. After all, the previous series spent several episodes defining/exploring his guilt, while Marcoh’s presence in FMA2 has been negligible.

Speaking of absentee characters, has anyone else been missing a certain bald-headed, pink sparkle-touting, body builder-teddy bear? Armstrong finally returns and gets some character build-up with this episode. Unfortunately, his character is brought low by Ishval-induced shame, striking a huge divide betwixt the nature of his FMA1 counterpart, who managed to keep a solemnity about him that was more mature in execution than FMA2’s weeping and apologetic figure. So far, this brief (and all too straightforward) look into Armstrong’s remorse makes his inner struggle a bit too 2D, but next week is promising (promising I tell you) to explore the whole story of Ishval, and the preview specifically featured Armstrong, so we’ll see what can be done to add some dimension to his guilt and the way in which it is shown.

On a final and much more impressive note, FMA2 further sets up a divide between humans and homunculi by having Mustang reveal to Ed that he only feels human when fighting those “real” monsters (homunculi), an allusion to guilt carried from Ishval and other unsavory military actions. FMA2 is taking its time building Mustang’s 3D nature, but I have to say that it’s a marvelous job so far. It’s much more tongue-in-cheek than FMA1’s Mustang and appropriately so.