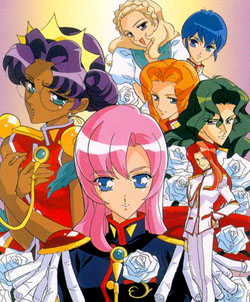 This episode is also called "The Answer is ALWAYS Golgo 13!"

Today I am joined by the Reverse Thieves, a blogging duo that has probably been on this show more than recommended by most physicians, to discuss shjo anime specifically the kind that can appeal to boys as well as its traditional target audience of girls. The four series up for discussion are Ouran High School Host Club, Revolutionary Girl Utena, Rose of Versailles, and They Were Eleven.

I have no idea what's going on for next episode, but I can say that Mitchy has been playing Assassin's Creed 2 and I plan to do the same very soon, and we are both itching to talk about Sword of the Stranger. We'll see what happens... next time on Dragonball Z the Ani-Gamers Podcast!

[0:00:18] Evan introduces the Reverse Thieves, laments Mitchy's absence, and promotes his Twitter lists, which include one for FANTASTIC PEOPLE and another for dangers to anime fandom. (Yes that means mo fans.)

[0:17:15] Discussion: To begin the conversation about shjo anime that appeals to male viewers, our hosts go over some basic definitions of shjo and its related anime and manga demographics. (Short version: It means comics and cartoons for girls.)

[0:20:33] The first anime up for discussion is Ouran High School Host Club. It's got a cross-dressing girl, a team of pretty boys, and a biting self-deprecating wit.

[0:28:37] Next we move backwards in time to the classic Revolutionary Girl Utena, a story about a cross-dressing girl, an academy for princes, and incest.

[0:37:01] Then there's one of the most prominent influences on Utena, the 1979 shjo epic Rose of Versailles. This anime features a cross-dressing girl (noticing a trend?), the French Revolution, and a sword fight atop a burning church.

[0:46:49] Finally we hit up another anime based on a manga by a member of the "Showa 24 Group," a loose confederacy of female shjo artists born in or around the Japanese year Showa 24 (1949). This one is the anime film They Were Eleven, with highlights that include a green scaly dude, a super-secret plot twist, and SPAAAACE ACADEMY. (No there is no cross-dressing girl in this one... or is there? We may never know.)

[NOTE] The Reverse Thieves did not have time during the show to mention these other great shjo series from their list of potential topics: Fruits Basket, Glass Mask, Honey and Clover, Kare Kano, NANA, Princess Nine, The Story of Saiunkoku, and X.

[1:01:27] We're done! It's time for pimping things, like the Reverse Thieves' Otaku Diaries or Secret Santa projects, or Ani-Gamers' Fullmetal Alchemist: Brotherhood Diaries column. Also the typical promotional stuff is in there.

[1:12:07] Back for another go, the Reverse Thieves (or at least half of them) attempt another Beatles cover performance. The attempt is partially successful.