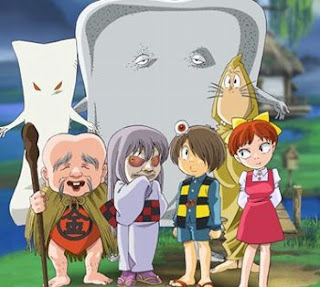 Recorded live from the 2009 New York Anime Festival, this episode features none other than the fearsome anime podcasting couple, Erin and Noah of the Ninja Consultant Podcast! We talk about what we did at the convention and delve into some totally off-topic conversations that may or may not be completely enthralling. You decide!

Next episode will feature Al and Kate from the Reverse Thieves blog as we tackle shjo anime that appeal to male viewers. It's already recorded, and I can guarantee that it's going to be a pretty fun show.

[0:00:30] Right off the bat we get into the NYAF09 discussion, despite our full mouths due to delicious sandwiches, granola bars, and yogurt. (For more on Erin and Noah, check out their podcast and read Erin on Anime News Network, where she has recently taken over Bamboo Dong's "Shelf Life" column.)

[0:01:22] Noah talks about the ykai panel he attended, and he and Erin explain what ykai are.

[0:03:40] Erin ties in the news and announcements from the con with a discussion of the Del Rey manga Ykaiden.

[0:05:55] More generally, Evan moves us along to the various industry panels and the relative dearth of manga industry representation.

[0:13:40] More license announcements (and definitions of gothic styles of theatre).

[0:15:20] The CPM Retrospective was really fun, especially since they were able to be very candid about the titles that they put out (since the company is now out of business).

[0:26:12] We get kicked out of the dining area before we're even a half-hour in, forcing us to end the recording! And then there's just some basic podcast information before the end of the show.