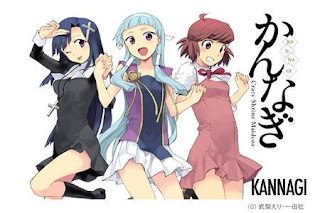 Clearly I've been more naughty than nice this year. It's the only thing that makes sense, considering the three anime chosen for me by my "Anime Secret Santa." The project, run by the Reverse Thieves, has a wide cross-section of anime bloggers trading review requests Secret Santa-style, with the goal of the choices being things that the reviewer on the receiving end might like despite having never seen before.

Somebody, however, is not out to make my Christmas a happy one. Whoever you are, my undercover friend, you should know right now that I shall never forgive you for what you have done. I shall hunt you to the ends of the earth, though you may hide behind the guise of Internet anonymity. "Why the hatred?" my readers might ask. "Why this open loathing for one whom you have never met?"

The reason, as the more astute among you may have already guessed, is that my Anime Secret Santa has had the courage (and cruelty) to request not one, not two, but THREE anime series straight out of the bowels of the dread spectre of moé (not exactly my favorite genre, to put it lightly). My friends, I am now tasked with choosing between Air, Kannagi, and True Tears.

So let it be known that I accept your challenge, oh mysterious fellow blogger. My poison of choice is Kannagi: Crazy Shrine Maidens, the Next Big Thing from Haruhi director Yutaka Yamamoto. I am prepared to stare without fear into the gaping maw of the moé menace. Do your worst.

My review of Kannagi will be posted on or around December 24. The pairings for the Secret Santa Project will be revealed on the 25th.