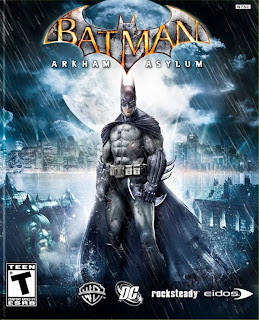 The premise behind the latest video game devoted to the Dark Knight is that he, while depositing his arch enemy (the Joker) into Gotham’s island prison (Arkham Asylum), is ensnared within a trap set by the very person he just brought back. No sooner is the Joker wheeled, Hannibal Lecter style, to the bowels of the prison’s receiving area than he escapes (with a little help from his friends) and the doors for (almost) all the inmates are unlatched. From there on out, Batman has one objective: to find and take down the Joker. A simple enough task, but remember where this game takes place. Throughout the journey, Batman is surrounded and attacked by almost every monster and maniac he’s helped put in these dank cells. In order to find the Joker, the Dark Knight faces a harrowing test of endurance and deduction to follow the trail to his torturers and make sure justice is served.

The above scenario seems like survival horror, especially when you consider the absolutely stunning artistic rendering of Arkham’s manmade and natural features. But for all the taunting smiles drawn in fluorescent green and red paint, all the eerily abandoned television loops, and the subtle ambient noises, the one thing that disqualifies this game from being qualified strictly as survival-horror is the inclusion of all of Batman’s wonderful toys. If it were to be a strict survival-horror, they should’ve taken away Batman’s utility belt (I mean, c’mon, Batsy surely has the fighting skills). However, as an action-horror game, Batman: Arkham Asylum hits the nail on the head.

Speaking of action, a combination of the FreeFlowTM fighting engine and enemy AI make controlling Batman throughout the game easy enough for entry-level button mashers while giving hardcore gamers enough special moves to keep things interesting. The latter includes stealth attacks and combos that can be upgraded during the course of the game after earning enough experience points. And points aplenty you’ll get from fighting though an onslaught of drone-type characters – thug, thug with club, thug with electrified club – tackling bosses such as Bane, Killer Croc, and Poison Ivy, and deciphering the Riddler’s enigmatic taunts.

Finding solutions to the Riddler’s mental challenges is done with the aid of the game’s worst handicap: detective mode. This mode lets Batman see through walls, determine which surfaces are hiding secrets (shortcuts or items alike), and track trace elements in the atmosphere. Aside from the last aspect, detective mode fails the game by making it far too easy. What saves the game from detective mode is that its use is optional. I recommend using it at first to learn the ropes, maybe even intermittently throughout your first run through, but then only using it when absolutely necessary for the rest of the game or any subsequent go-around. It ups the difficulty and demands that players become Batman instead of becoming Batman’s tech.

Aside from that singular drawback, there are many things to gush about in this game. To start, it’s excellently written by Paul Dini, one of the guys behind Batman: The Animated Series. Voice actors from the same read the script: Mark Hamill reprises his uniquely lovable Joker (though this time with a bit more darkness than the cartoon's sensors could let by), Kevin Conroy brings CG Batman to life in the true tradition of often being voted as best Batman ever, and Arleen Sorkin pulls up on the corners of mouths everywhere while smashing people’s funny bones as Harley Quinn. Gameplay variety also makes this game engaging. Let alone the combat challenge mode (better on the PS3, which exclusively lets you play as the Joker) and detective/action aspects of story mode, my favorite part of the game is the integration of a platforming game-within-a-game that served as the Scarecrow’s mini-levels in story mode. It takes guts to revert to platform gaming in an age of 3D environments, and the execution only adds to the game’s ambience.

All in all, Batman: Arkham Asylum is an immersive experience made by all the right people for a fanbase that’s uber-picky when it comes to their hero. Seeing as it is already worshipped by critics and inhabits a place in the Guinness Book of World Records, I would be an idiot to disagree. Story, rendering, control, and acting come together to make this a 3.5-star victory, with slightly lacking replay value being the only thing detracting from a perfect score.