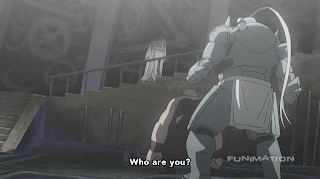 There’s a few of these sucker-punches in this episode. First, there’s a line delivered by Envy (“as soon as you gain a great power, you get carried away with it, not even knowing what it is”) that may seem like a throw-away platitude to first-time FMA watchers. It should, however, strike a chord with those who have seen FMA1 all the way through to its end. I think this is a deliberate taunt designed to evoke that shock FMA1 watchers experienced when we found out death in the parallel world was the driving force behind alchemy in Amestris. It also serves to set up something grand in its own right.

What follows, that power is taken away from Ed and Al (something that never happened in FMA1, save the destruction of Ed's limbs), truly evokes the sense that Ed and Al (and by proxy all who use alchemy) are just children playing with tools they know almost nothing about. This was a theme only touched upon in FMA1 via the discovery of alchemic energy’s aforementioned source. There’s no indication FMA2 is heading in that same direction, but for former FMA1 watchers...if you felt the wind knocked out of you for a second there...that’s most likely why.

Another sucker-punch stems from Greed changing bodies. This is a situation formerly only alluded to in FMA1, with Lust’s introduction to Greed (“And if you haven’t figured it out yet, I’m the new Lust.”), and it sets up a good confrontation in which Ed might have to sacrifice his commitment to pacifism if made to slay the new Greed, who’s wearing Ling Yao’s body like an expressionistic guilt trip. The major FMA1/2 dichotomy would then rear its ugly head regarding effectiveness though. Have Ed and Ling formed a bond strong enough to really make the audience care about Ed’s inner conflict over whether or not to kill the new homunculus? At best, Ling serves as a surrogate annoying brother/battle buddy, but as soldiers will tell you, seldom are the bonds formed on battlefields considered superficial. So FMA2 keeps true to form and, in my opinon, pretty believably on track.

On the disappointing end of surprise lies the evil twin theory. I had a feeling that FMA2 might pull it, but I kept telling myself that this series wouldn’t dare pull such a cliché. There’s still hope for the reason behind dual Hohenheims (Elric & “Father”) in this episode, but the very fact that FMA2 couldn’t have the gall to make them one and the same is a tragedy for round supporting characters. Like I've said previously, even FMA1’s Hohenheim had a very well developed dark past to offset his slightly dingy luminescent present. Next week, the battle (which was disappointing in action but interesting in enterprise) continues.