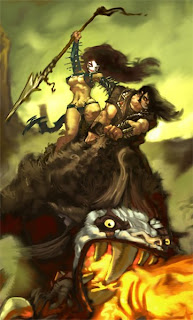 So just a few weeks after release, EA is already scrambling the jets to help out the multiplayer aspect of Brütal Legend.

According to EA's site, a new mulitplayer map pack is due out November 3, 2009 for Xbox 360 owners and will cost 400 Microsoft Points. PS3 owners get theirs on November 5, when it will be available for free download for about 2 weeks before it is officially sold for $4.99 on PSN. Named "Tears of the Hextadon," this map pack will feature two new maps – “Circle of Tears” and “Death's Fjord” – and a new axe for players to battle with. Sounds pretty good, right...?

Well, let's look at the facts. This does increase the number of multiplayer maps available in game. However, the map count only increases from six to eight. The new axe might be an improvement, but the teams are what really need work, not the weapons.

I don't plan on getting this expansion. Like I said in my review, there is not much replay value in the game and all of the maps are really similar. My loathing of these maps is made even stronger by the knowledge that most map packs for games give so much more than just two maps and a modified weapon. The fact that this is also going for dirt cheap probably means that the multiplayer engagement in Brutal Legend is falling fast. Don't expect to see much more out of Brütal Legend unless EA and Double Fine put their heads together and really try to fix the game's major shortcomings with this game.