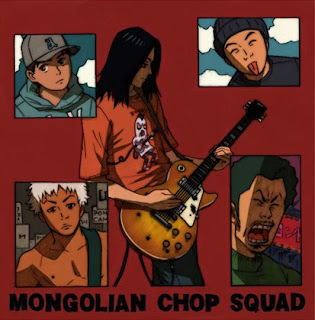 With the primal screams and pounding rhythms of raw musical emotion, studio Madhouse and director Osamu Kobayashi rocked the anime world in 2004 with Beck: Mongolian Chop Squad, an anime that caters to the would-be rock star yearning inside the fingers of even the most timid otaku! That said, English-speaking viewers should throw their linguistic inhibitions out the window, forget all about the sub/dub debate, and listen to the original Japanese audio. It far surpasses that of the English dub because it distinguishes the English effort.

I say that because the original audio track incorporates both English and Japanese – nigh un-unwittingly so. That is to say, the Japanese audio is the reason to watch Beck because it exploits the idea of a foreigner (no band name pun intended, but duly recognized) and his influence on mainland Japanese culture.

Sure, the writers will try to explain it away with, “Oh, he only left the country and then came back,” but, because of the character’s affiliation, he is a foreigner for all rights and purposes. And as badly voiced as his English almost always is, it makes the presentation perfect because the character, a sixteen-year-old rocker, sounds slurringly drunk upon every English line delivered. But what are musicians if not drunks? Businessmen?

The very thing that makes this series initially watchable, besides the West’s obsession with corrupting the East (and the East’s with being corrupted by the West), is that the life of a band and its members is so accurately portrayed via a “series of down endings”.* After all, who wants to watch success? The joy of life is in the struggle. Watching someone eat cheesecake at a restaurant is boring, but laughing at them eating crumbs from a dumpster is funny and humbling. 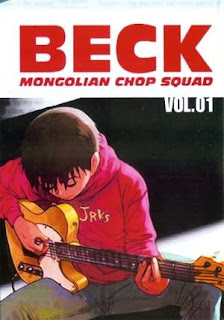 Though watching the (romantic and technical) failures of the main character is painful – and I mean really painful – it relays real-world experience (semi-dramatically) as opposed to glossing over said failures in the interest of moving the plot along. The story and all its barbs make you, the viewer, stick to each happenstance and feel each down-turn, bringing you into the proverbial shoes of a teenager who wants nothing more than to be something more than what he has been.

The atrocity lies in attempting to watch this anime with the English dub track, which totally ignores the beautiful (if only unintentionally brilliant) bilingualism that sets up the main romantic conflict. Crossing borders is what Beck is all about, be they stylistic, cultural, or emotional. Ignoring such an extended metaphor would be detrimental to its intent, as shown through the many misunderstandings and dialogues throughout the series.

Admittedly cheating, I would counter any argument that Beck progresses slowly by saying that the plot is not what is in focus. Rather, it is the character development – all the trials and tribulations applied to a life in transition – that drives this episode-by-episode serial. Anyone familiar with the catharsis behind a scream, the mimicked strum of a guitar, or the reverberations of a desktop drum solo will tell you that it is music that drives the soul and the events behind life that drive the sympathy between player and listener.

Listeners, all of us, must identify with, if not the creators' intentions, then the events in our own lives that correlate with the Beck's consistent message: that we all can become something more than what society so often bullies us into believing is "impossible." So go ask the girl out, get up on stage, and show us your heart. You'd be amazed how much only the shadows of difference can accentuate similarities.