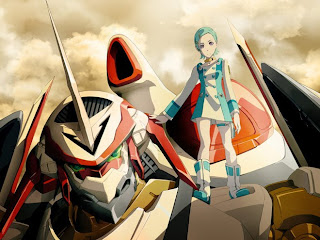 Bandai's NYAF panel, staffed by Marketing Director Robert Napton, Loy Fruel, and Bandai Entertainment President and CEO Ken Iyadomi, was unfortunately lacking in any major new announcements. The three simply went over their current lineup of anime and manga, including Kannagi, Kurokami, Code Geass (anime, manga, and light novels), Gurren Lagann (anime and manga), Gundam 00, (anime, and both the 00 and 00F manga) and Eureka Seven (anime and manga). However, Mr. Iyadomi briefly interrupted the show to let Napton know that it was okay to announce the only new information that the company brought with them to the convention: the home video release of the Eureka Seven -good night, sleep tight young lovers- movie will hit stores on January 26, 2010 for $24.19 (DVD) or $39.98 (Blu-Ray).

Not to be discouraged by the relative lack of announcements, some other manga journalists and I spoke with Robert Napton (who also heads Bandai's manga division) in a little mini manga summit in the NYAF press room shortly after the panel. I don't have the time to transcribe the whole thing just yet, but I'll be sure to post the high points of the discussion as soon as I'm done listening to my recording.

EDIT 1: Fixed some typos and added more clarification of Bandai's lineup of titles.